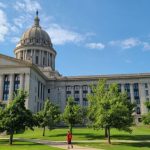 Date Visited: July 6, 2021
Oklahoma City is the Capital of the State of Oklahoma, but most people just call it Oklahoma and then you kind of guess with the context if the person is talking about the city or the state. If the locals are writing about Oklahoma City they just write OKC.

Oklahoma City was founded in 1889 as part of what was called “The Land Run.” The federal government had recently cleared this land from Native Americans and they had this race and the person with the fastest horse to these land marking flags got the land. Due to all this land the then territory grew quickly and by 1907 Oklahoma was ready to become a state.

Centrally located Oklahoma turned out to be a great gathering point for all the cattle in the region and eventually the Oklahoma Stockyards became the largest stockyards in the United States. In the 20s Oklahoma became a major rest stop on the famous Route 66 to California. Everything was growing great until World Ward II came along and then things started to deflate. 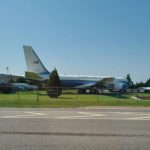 In case you wondered to the 1970s Air Force One, it is in Oklahoma. 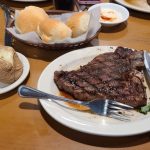 This steak deserves the title of The Presidential Steak 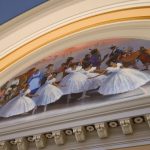 An interesting painting celebrating the diversity of the population of Oklahoma. 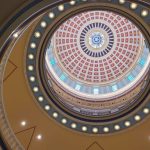 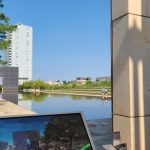 The memorial lake in Oklahoma remembers the sad moment in history of the Oklahoma Bombing. 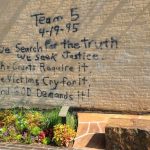 The worse part of the Oklahoma bombing was the rescue teams having to pull out the bodies. 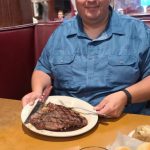 A plate full of steak will bring a smile to my face.

The Oklahoma Capitol is big. 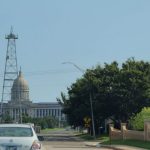 Only in Oklahoma will you find a oil derrick in front of a capitol building.

The Federal government took up the slack once again and in the 80s started to develop a lot of Federal installations in downtown Oklahoma City. These Federal buildings would become the target to a home grown terrorist, who in 1995, detonated a semi-truck full of fertilizer killing 168 people and wounding 800 more.

These days Oklahoma City is growing once more. Leaning into it’s western roots, OKC has rebranded itself as a modern cowboy town. If you go there you can still visit the stockyards and have your very own Presidential Steak (as declared by former President George H.W. Bush in 1992). After you get your steak you can visit the National Cowboy museum and maybe even catch a basketball game.