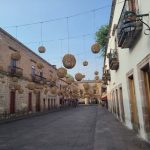 Date Visited: 5/27/2021
When the Spanish entered Michoacan in 1521, thanks to a treaty with the Purepecha tribe, they quickly dominated with very little bloodshed. The original state capitol of Michoacan back then was Pátzcuaro, which right by a big lake and very close to the Purepecha capital called Tzintzuntzan. The Spanish did their typical procedure and built a really big church in Pátzcuaro, but the Spanish settlers coming from Europe didn’t really want to mix with the locals. The settlers said that the Purepecha had ruined the purity of Catholic rituals by mixing them with their old customs. So to preserve their semblance of purity, in 1540 they built what was then known as La Nueva Valladolid.

Being a new city on land that wasn’t really previously inhabited, the Spanish got to make it into their ultimate expression of European ideals. The city was built with big roads that go in and out of the city, a big aqueduct, and plenty of Catholic churches, that are kind of interesting because on the outside they a very austere and pious, but then you go inside and they are overflowing with the most abundant baroque interiors you will ever see. The city was home to some of Mexico’s first schools and universities, and there is many art museums within the city. 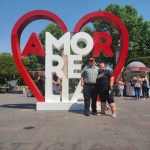 Can’t say you were in Morelia if you don’t get the letters. 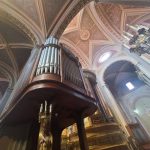 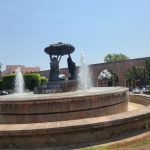 This fountain is dedicated to the Purepecha woman. 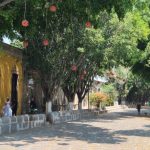 Back in colonial times this walkway was only for white people. Morelos changed that. 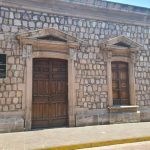 The birthplace of Morelos. 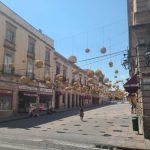 A wonderful walkway that demonstrates new and old together. 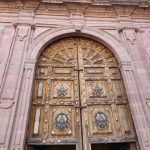 Door to the Cathedral 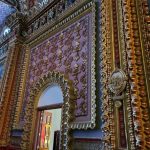 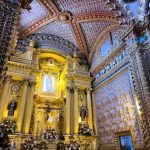 The altar of the San Diego Church is made out of gold. 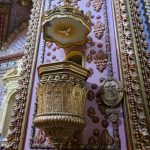 The lectern at the San Diego Church. 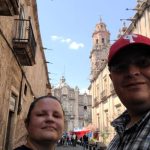 In front of the cathedral is the governor’s palace.

This flourish of artistic expression became the birthplace of many new world ideas. One of which was the idea that Mexico should be free. Two of the founding fathers of Mexico Miguel Hidalgo and Jose Maria Morelos, called the City their home (the latter being born there). After the Spanish and the Mexican empires fell, Michoacan was one of the first states to become part of the United States of Mexico (that is the official name of Mexico). One of the first things Morelos did when he made Michoacan a state was to declare that all of Mexico was also free from slavery (Morelos was from African descent). In declaring it’s independence from the two empires, the city of Valladolid changed names to Morelia in Jose Maria Morelos’ honor and has continued ever since with the name.

Today the city of Morelia really hasn’t changed much. The city was so well planned out in 1540, that as times have changed, the City of Morelia has not had to do much to update it’s infrastructure. Paved roads have covered the cobblestone, but the streets are wide enough to still support the modern flow of traffic. One interesting story is the sewer system in Morelia was so well planned that only in 2020, did the city have to start replacing the old ceramic pipes that were originally laid out in the 16th century. As you walk the town you will definitely feel the colonial tones in the architecture, but as you walk down the street you will also find a huge technology market, right next to the 300 year old cathedral. It just all mixes. 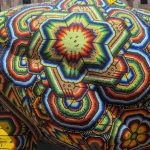 Someone had too much fun with the plastic beads. 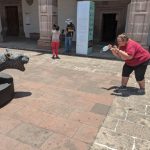 Denise versus a cougar. 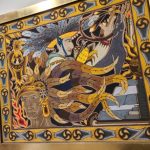 Are made with reeds. 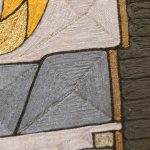 Close up of the reed art. 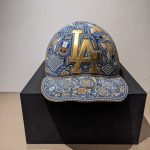 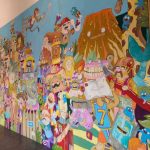 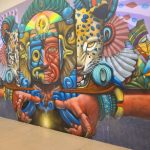 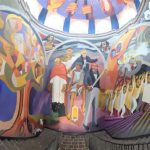 What also mixes in Morelia is the food. If you live in the United States, especially California, you probably unknowingly have tried some of the food from Michoacan. The most popular dish from Michoacan is it’s ice cream. Ice Cream, originally made in big metal jars, are known throughout Mexico and even abroad. There is almost no city in Mexico that doesn’t have a La Michoacana ice cream store. Another interesting mix is a dish called makis. Makis are basically sushi rolls, but where sushi is known for only having rice and fish in the roll. A maki has rice wrapped in seaweed, but a maki can also have other protein like chicken or beef. A maki also doesn’t use wasabi, instead in Mexico the maki usually has a creamy chipotle type sauce. Other food that is typical is carnitas (shredded pork), gazpacho (a fruit cocktail), and corundas (triangle tamales). 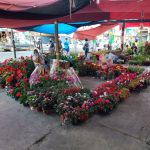 I love the flowers in Mexico. 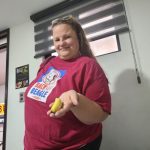 Every morning they had the smallest bananas I have ever seen. 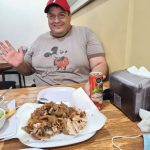 This would be known as meet candy to carnivores. 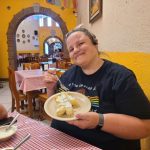 Denise with a sweet tamale. 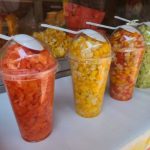 Gazpacho is a fruit cocktail. 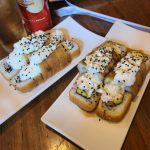 Morelia is not very well known on the tourist trail, but it is an icon of what makes Mexico a great country. When you walk in the streets or hear the pipe organ (one of the largest in all of Mexico), you feel the history. Every corner has an interesting story to tell and the more interesting part is the story is never ending, and I think that is how the city planners meant it to be, the Morelia just keeps mixing itself up and always comes up with another interesting story.