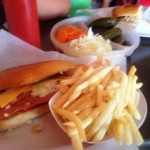 Most people think of the typical Mexican quisine as being the taco and they are right, but I (John) am a big fan of tortas. For those that don’t know what a North American torta (please note in South American that word is a different type of food) is best described to a Gringo (you if you can only read English) as a Mexican Hamburger. It is made out of a bolillo (a big bread roll), mayonnaise, and various savory toppings. My favorite tortas are in Mexico City, but abscent a trip to Mexico’s capitol city. I can’t leave Mexico without trying to find one. 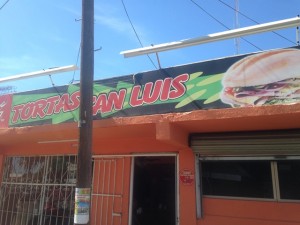 Tortas San Luis is located on a dirt road on Calle Cuatemoc with the cross street of Melchor O Campo. 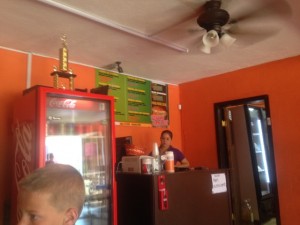 Go big, it isn’t going to cost your wallet much. Never found out what the trophy was for, best sandwich maybe?

The second thing that makes a torta good is the size and toppings. Tortas San Luis had kind of simple toppings: chicken, ham, bacon, and pierna (leg). The choices were simple but they put a lot of meat on the torta. Besides, after you add cheese, lettuce, mayonnaise, onions, avocado, and tomato it still bigger than most burgers you have ever seen (if you want to see something really crazy order a torta cubano in Mexico, but that is for a different blog entry). 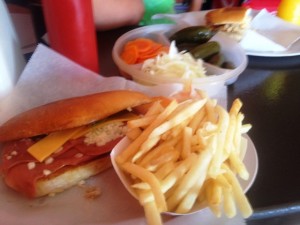 This ham and cheese torta with fries cost about $1.50 USD.

The last thing that makes a torta is the bolillo, the bread roll it is served in. The original bolillo has French origins in that it has a very crunchy crust with a soft middle called the migajon. Also common in Central Mexico is what is called the Telera roll (a rounder bigger roll). In Puerto Penasco they had a different kind of bolillo called a birote. This was a longer skinny roll, that was a bit sweet (kind of like a crusty Hawaiian roll). It was different than what I was used to but it was still very good.

Unfortunately, the joy of the torta is a fleeting moment. Tortas are made quickly and thus made to be eaten quickly, but the food was good and my belly left full so I was happy.