For the most part crowds are bad because they make things slow, but sometimes you need a crowd. For example have you ever been to a concert and their were not that many people there? I have and though it makes getting out of the venue easier, for the most part it makes for a sad concert. There just isn’t any energy. For that reason certain events make sure there are a lot of attendees, by giving away discounted tickets.

Goldstar.com is a favorite website of mine for finding discounted tickets. Often I can get my event tickets at a 40 to 50% discount, through the site. I must use the site a lot because a few weeks ago for my birthday Goldstar.com gave me $10 of credit to spend at any event on their website. $10 for most events is not much. It isn’t going to get you to a play or a rock concert, but apparently it is enough to get me two tickets to the LA Cosplay Con. 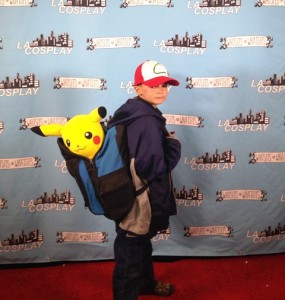 This was our first cosplay convention. I have vaguely heard of the term cosplay before, but I have to admit I really don’t know much about the subject. For those like me who are not in the “know”, cosplay is when people dress up as their favorite cartoon characters. Basically, it is like a giant Halloween costume party, but there is no trick-or-treating (which sadly means no candy). There is however LOTS of photography going on. Cosplay conventions are the place to be seen, and the way you get seen is through your costume. 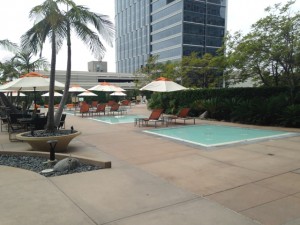 The venue for the convention was the Century City Plaza Hotel. The décor of the hotel was very modern and very trendy. A good environment for those wanting to be seen. I noticed there was kind of a game going on at the convention. There was two unofficial games going. One was to see who could take the most amount of pictures (those playing this game were noticed by their very fast shutter cameras). The other game was to see how many people asked you for your picture. AJ did very well at that game.

Apparently going to a cosplay convention dressed as Ash Ketchum will get you lots of attention. I think a lot of it had to with the fact that AJ is 7, but still, lines were forming for the kid. Had I been a little bit more enterprising I would have bought him a booth and I think I could have gotten some money out of this deal. Alas, I was not that smart, but AJ did meet a lot of new friends.

We were not at the convention as long as I would have liked us to be, but we were there long enough for me to learn something about cosplay. Quality and effort put into the actual making of the costume put aside, I found out that a lot of research goes into making a costume for a cosplay convention. Research methods included (but were not limited to): reading lots of comic books, watching cartoons, playing video games (that had cartoons in them), and jousting in a big bounce house with padded battle sticks. I am not sure how that last research method helped me learn more about cosplay, but after watching me fall down two times AJ told me that it made him feel better, so I guess that helped. 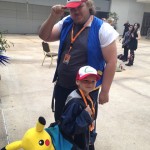 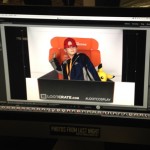 I am still not sure how lootcrate.com works but I think they are shipping AJ back to the house next week. 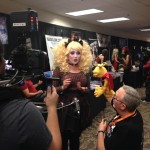 This lady was having a very serious discussion with a puppet dog for youtube. 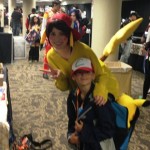 AJ was bound to find Pikachu. She was very nice to let us take her picture.

I met a lot of people that I were told were professionals in their field. I believe it, they looked like professionals to me. The only two pros that I actually recognized were Kyle Hebert (who does some voiceovers for an anime called Bleach and a game called League of Legends) and Robert Axelrod (who does voiceovers for evil guys on the Power Rangers show). If you haven’t heard of those two people it ok, just sign up for a League of Legends account and join me for a PVP (Player vs. Player) battle, I need the IP points and you wont mind the loss, right?!’

If my writing style on this post seems a little tongue and cheek, it probably matches the vibe that I got from the LA Cosplay Con. I still don’t claim to know hardly anything about cosplay, but I did get the feeling that sometimes you just don’t need to take yourself too seriously, because in the end it is all for fun. 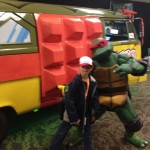 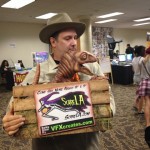 The dinosaur inside the crate made cool noises.