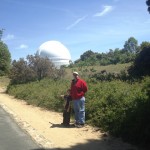 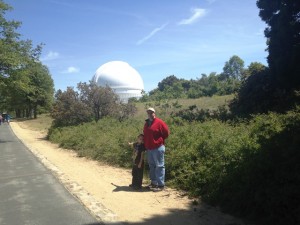 AJ and John with the 200 inch palomar telescope in the distance.

Our plan for Memorial Day 2015 was to go to the water park. Unfortunately, the weather did not cooperate. With lots of cold cloudy weather and a possible chance of a downpour we decided to abandon our original plan and tried to find something else to do. In the end we decided to drive down to Palomar Mountain. It was a long drive but we broke it up by stopping in Temecula for lunch.

Palomar Mountain Observatory got it’s start in 1934 when George E. Hale, approached the Corning Glass Works of New York with a proposal to instead cast the 200-inch mirror out of a glass blend called Pyrex. The first attempt failed when the Pyrex cracked in the furnace. Not to be deterred another 20 tons of glass was molded and then shipped out to Palomar Mountain. Palomar Mountain was chosen as the site of the now called Hale 200 Inch Telescope because it’s remote location was thought to be a good place to avoid the light pollution of the then growing city of Los Angeles. In 1936 the second glass mirror was shipped by railway to Palomar and they started to grind it for 11 years (a lot of it had to do with this thing called WWII).Interesting to note that after all the grinding the glass mirror went from 20 tons to 14 tons.

The wait was worth it because as soon as the telescope was activated it started to discover amazing things. The telescope’s first assignment was to look at the Andromeda galaxy where it was proven that stars expand and contract. The telescope has also taken some amazing photos of exploding stars. Still a working telescope today, it is run by Cal Tech every night it is clear (the exception being December 24th and 25th). Anyone who is a scientist and has a good assignment proposal (and let’s face it, probably some money) can put their name on the list and use the telescope. When we were there, they were using the telescope to study the Quasar Evolutionary Model (if you want to know what a Quasar is I suggest going HERE).

The telescope is an amazing piece of machinery. It is what is known as a reflector telescope in that the mirror to focus the light coming from space. In it’s younger days a scientist would ride the top of the telescope and use cameras to take pictures. The film would take a few days to develop and then the scientist would be able to see what he spent all night trying to picture. Today instead of humans, computers ride at the top of the telescope. Mechanically the telescope is the same as it ever was, but the computers do the work a lot faster in that they process the images instantaneously. Also new infrared sensors can sort out space distortions better than any human ever could. 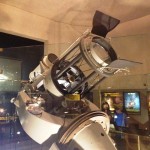 The 18 inch telescope on display in the museum. 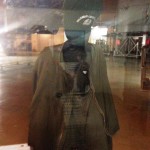 In the old days when scientists used to ride the telescope they would wear Air Force heating suits like this one to keep warm overnight. 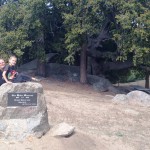 AJ and Denise at the Gus Webber Picnic area. 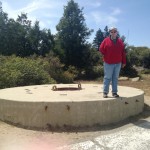 Before the mirror was installed they used this 20 ton concrete disk to test the telescope moving mechanics. 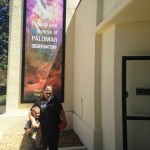 AJ and Denise in front of the Musuem. 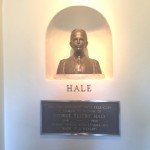 Gregory Ellen Hale was responsible for finding the funding of the 200 inch telescope (also is who my elementary school is named after). 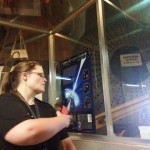 Denise looking at the Hartman screen which was used to place the 200 inch mirror. 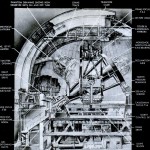 This picture shows how the telescope works. Back in the 40’s a observer would actually ride the telescope and take pictures manually. Now computers take the pictures.

Getting to the observatory is relatively easy. Coming from Hwy 76 you just go up county road S6 (to the very top) about 14 miles. The road is paved and very easy to drive, there is no gas stations on S6 so you do need to make sure you fill up before hand or you will be doing what we did and paying for very expensive gas at the Indian reservation trading post (click HERE for gas stations close to Palomar). The views from the top of the mountain are amazing, you can see for miles. In addition to the 200 inch telescope there is a 60 inch and 48 inch telescope, but only the 200 inch telescope is open to the public. The site is not very handicap friendly (there are 70 steps to get to the viewing platform), but at 1 PM they do have a handicap accessible tour. It is free to visit the telescope, but if you want to take a tour you need to pay $5. We skipped the tour and just explored on our own.

While walking the grounds of the observatory AJ found a family playing with a drone. He was fascinated with how it worked and asked more questions to the drone’s owner than the telescope. Moving parts are a little more exciting than just staring at stationary objects. Here is a video from the owner of the drone: