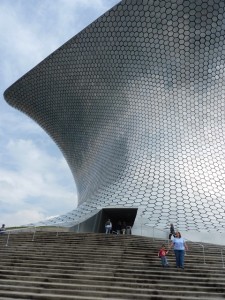 The building kind of reminded me of a shiny top hat.

The Soumaya Museumin Polanco was named after Carlos Slim’s wife and inaugurated in March of 2011. A six story building it is filled with artwork and antiquities arranged in chronological order. On the top story there is a sculpture garden filled with Rodin artwork pieces. At the bottom there is a floor dedicated to all the different Mexican currency (figures the richest man in the world would display money). 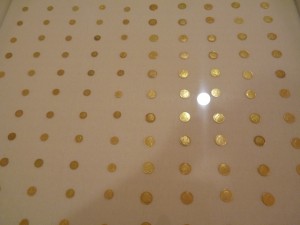 I can't even begin to imagine what all these gold coins are worth.

Getting there is a little bit tricky because it is not close to any metro station. The best way is to get on the Orange Line (#7, tickets are 3 pesos) and get off at the San Joaquin station. From there you can take a peso for about $3 pesos (.30 cents USD) which will let you off within a block of the museum. 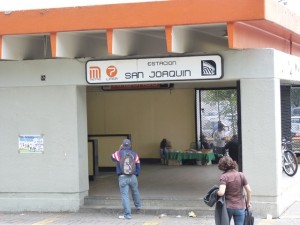 Metro station San Joaquin is the closest station to the museum.

When the museum first opened it came with much fanfare, but the critics didn’t like it too much. One critic went even so far as to say “money apparently doesn’t buy good taste”, but I disagree. I wouldn’t call it the best museum I have ever seen, but I definitely thought it was interesting. Riding the elevator to the top and slowly walking down the long winding ramp was very fun. Not only that, it was free!! So you couldn’t do much better.