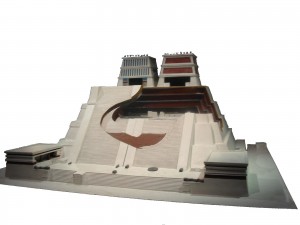 This scale model shows the many layers of Templo Mayor.

The other day I posted that I could only imagine what it must of been like for Hernan Cortez when he first laid eyes on the Aztec capital of Tenochtitlan. As it turned out I didn’t have to imagine too much. In a report to the Spanish king in 1522, Hernan Cortez gave a very elaborate report on his findings of Tenochtitlan. In his report he said that the main square had approximately 40 temples with shrines to various gods on top of each temple. He also said that the pyramids were larger than any of the church spires in Seville. He said that there were fires burning day and night with the a constant air of incense. People were always busy in the ancient capital and had many specialized functions. 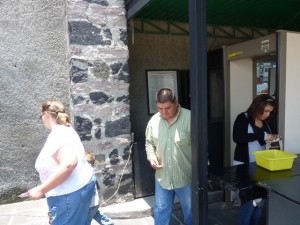 Security is pretty tight at the Templo Mayor

On our second day of our last trip to Mexico City we visited El Templo Mayor (the main temple). Admission to the site is $35 pesos (a little more than $3 USD). If you want to see the temple that Hernan Cortez saw go all you have to do is look at the cathedral. 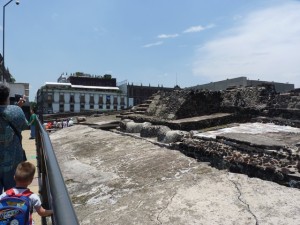 For the Aztecs, El Templo Mayor was vital to keeping the universe moving. Blood was considered the staff of life to the Aztecs and only by continually feeding blood to the gods did they believe the gods would continue their work of running the universe. On the main temple were the two shrines dedicated to the main Aztec gods:  Huitzilopochtli, god of war and Tlaloc, god of rain and agriculture. After a sacrifice was made the body was hurled down to the stone representing Coyolxauhqui (the moon goddess) as a payment to release the sun from her grasp. 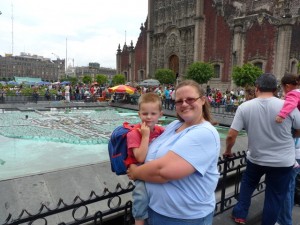 In this picture you can see the cathedral in the background and a scale model of what the city looked like when Hernan Cortez first came to Mexico City.

The Mexico City cathedral was built out of the stones quarried from El Templo Mayor. The temple and the surroundings had been built over a total of 7 times. What is at the site today is actually leftovers of the 1st,2nd,3rd, and 4th layers of the temple. Each layer was made by sacrificing a bunch of people and then burying the old temple. It is said that during the dedication of the 4th layer in 1487 King Ahuizol ordered the sacrifice of 1000 people a day for 20 days. The temple it is written became a river of blood. After Hernan Cortez conquered El Templo Mayor was almost totally forgotten. There were a few token digs, but it wasn’t until 1978 when the temple was rediscovered by electricity workers digging for new underground electric lines came upon the remains of El Templo Mayor that any real archaelogic studies began. 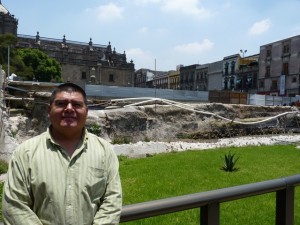 Alex in front of the new archaelogy digs in progress.

Many things have been discovered at El Templo Mayor. Some of these things include the Aztec calendar stone, the palace of the eagles, and sacrifice stone of Coyolxauhqui (goddess of the moon) upon which were thrown the bodies of those sacrificed. Excavations still take place at the site and new things are discovered all the time. 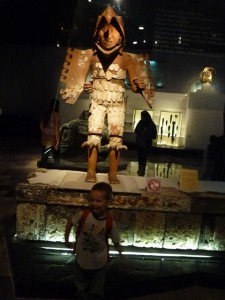 AJ saw this eagle warrior and immediately started to do the chicken dance.

In addition to seeing the main temple you will also see the Palace of Eagle (the Aztec elite guard) and the museum which houses some of the artifacts discovered at the site. We spent only a few hours there, but we could’ve easily have spent an entire day looking at both the site and museum.

After we visited El Templo Mayor we went to this “All You Can Eat” Chinese place. It was cheap, but it was horrible. I don’t know what posessed us to visit a Chinese restaurant in Mexico, but I will never do that again. I guess I thought since Mexicans run all the Chinese restaurant kitchens here in the USA it couldn’t be that bad, but I was wrong. Not everything I guess can turn out perfect.