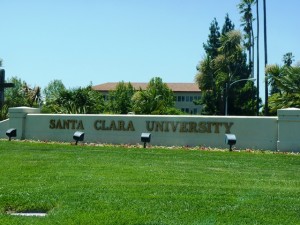 Due to the vast greatness of the San Francisco bay the Santa Clara Mission was ordered to be established as soon as feasibly possible. Founded in 1777, the story goes that the natives at the site were friendly but a bit mischievous. The stories of the mission recount the struggles of the Spanish settlers to get the mission started. That is until in the 1830’s when Father Jose Viader came to the mission.
The story goes that one night Fr. Viader was walking the compound when a young Native American named Marcelo walked up to the priest with two of his friends. Dissatisfied for an unknown reason they attacked Fr. Viader. Unlike his humble associates Fr. Viader fought back, so much so that he “soundly trashed” the three boys. Taken over by the display of strength of Fr. Viader the two became really good friends (it’s a guy thing). The friendship encouraged relations with the natives and the mission slowly grew. 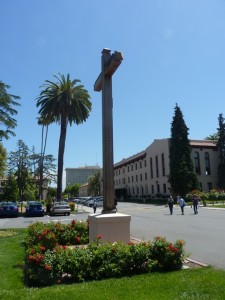 The original cross carried by Junipero Sierra is enclosed in this redwood cross.

After secularization the Santa Clara Mission dwindled like all of the missions but was revived much sooner than rest of the missions when in 1851 control was transferred from the Franciscan to the Jesuit order. The Jesuits were more interested in conversion though academics and transformed the mission into what it is today, Santa Clara University.
Although remnants of the original mission exist, the halls of higher learning is what prevails now at Santa Clara. While we were there we felt very welcome by the campus community. At the entrance we were offered a free 2 hour parking pass and enjoyed the free admission to the de Saisset Museum art museum. In the basement of the museum was a permanent exhibit chronicling the mission’s history. On the way out the bells rung and we felt like we were also students having just left a lecture class on our way to our next lesson (which at that point was Find a Place to Sleep 101).

A little video I made: