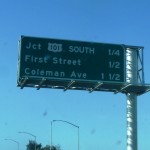 Our plan was to hit three missions all in on day. The missions are about 30 miles apart from each other and they all are open usually from 10am-5pm. We decides thar that out of the three remaining missions, San Carmel was the farthest from our current position of Fremont, CA. We left our motel early in the hopes of getting to the mission right when it opened. 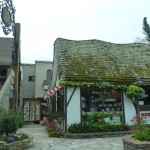 The town of San Carmel is very quaint.

Arriving in Carmel Denise stated that she needed to make a potty break. Vesting off our GPS plotted course we began to explore the town of Carmel in search of a public restroom. Driving through the city we noticed several things. First of all Carmel may be a city but it doesn’t seem that big. This is probably due to the fact that the roads are small and we did not see any stop lights. Navigating Carmel was a little confusing because the street names are on concrete posts on the corners that can be sometimes hard to read. We did not see any large scale stores, all the stores and restaurants we saw seemed to be small independent operations. Lots of people were walking around, my guess mostly tourists like ourselves. The only difference was the crowd seemed to be older than ourselves, if I was to give an average age I would have placed most people in their mid 50s. Didn’t seem like our type of scene, but we were there for the mission.
Some missions were established and became the nucleus of their newly founded towns and cities, in other cases as the missions became obsolete they became relegated to the outskirts of town. The Carmel mission fell into the latter and is now a few miles out from the center of Carmel. 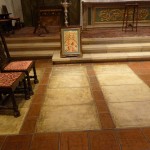 The final resting place of Father Junipero Serra. Fr. Serra used the Carmel Mission as his headquarters while he was alive. Fr. Serra was a Franciscan by order and lived a very simple life which is evident in the simple living conditions of his cell chambers. Although one could argue the political ambitions that led to the missions, it was said of Junipero Serra that he was genuine in his desires to live up to the tenants of hos faith.
The mission grounds are very beautiful. As you explore the rose garden your line of sight is instantly drawn towards the star pattern window and domed roof of the mission. Strolling the main chapel you see many graves of many prominent Californianos. To the left of the altar is the grave of Fr. Serra decorated with a portrait with his image. 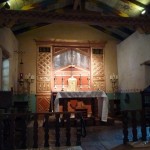 As beautiful as the main altar is, I found myself enjoying the smaller side chapel more. Simple in it’s design it had a small organ and small altar. At the foot of the altar was the grave of Ann Sutter. I looked up the name later and found out she was the mother of a major contributor to the mission’s restoration. I was the only person in the little chapel and enjoyed a small moment of contemplation.