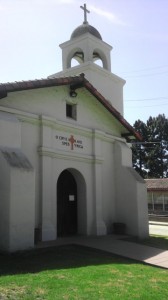 The Santa Cruz Chapel is a 1/2 size replica of it’s former self.

Leaving the Carmel Mission we headed north to Santa Cruz. On arriving to Santa Cruz Denise declared that Santa Cruz was not a city she would want to live in. This struck me as odd because Santa Cruz to me seemed like a city that met Denise’s general requirements. Santa Cruz holds many entertainment venues, many markets, and is encompassed by a major university.

It is just as well because Santa Cruz was not cheap, which is a major requirement of any place I can settle in. After visiting what was the mission at Santa Cruz we went to lunch at the downtown River St. The meal at the tiny Campesino Cafe was tasty, wholesome, and organic, but a $40 lunch definitely hit the pocket book. Oh well, we had the money, but I still am not sure I would want to pay that every day.
Before our tasty meal we worked up our appetite by exploring the grounds of the Santa Cruz Mission. The only thing left of the original mission at Santa Cruz is a very solitary wall in the back of the parrish parking lot. It is a very realistic representation of what happened to the missions. Revolt, government interventions, earthquakes, but mostly just time desintigrated the missions.

Luckily the missions have friends and Santa Cruz is no exception. Through generous donations from the Friends of Santa Cruz there is now a half size replica of the Santa Cruz Mission. Around the corner is a California state park that preserves the last remaining adobe structure, a building that once housed the native population that helped build the mission. It was interesting to watch the video and imagine for a moment what it was like to be a neophyte in a mission setting.