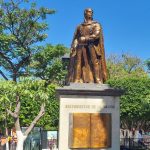 It basically comes down to Mexican independence, which is celebrated on September 16, because that was the day in 1810 that the Mexican priest Miguel Hidalgo rang the bell to rally the people for a free and independent Mexico. If you read my post about Chihuahua, you learn Spain responded to this by capturing Miguel Hidalgo and chopping off his head. One of the people who followed (but luckily not too closely) Miguel Hidalgo was a General by the name of Jose Maria Morelos. Hidalgo got caught, but Morelos did not, and escaped south to Guerrero (which back then was called Tecpan). Morelos kept his head and in 1813 he wrote a document called Sentimientos de la Nación (Feelings of a Country), which turned out to be a big headache for Spain. This document was the predecessor to a formal declaration of independence, and I will cut this short by letting you know Mexico was not feeling like it wanted to be part of Spain.

Mexican independence was kind of a complicated affair and the first ruler after Spain was an emperor, but Mexico didn’t like the idea of an emperor, especially after it just got rid of a king, so in comes this other general called Vicente Guerrero (because the the first emperor of Mexico managed to kill General Morelos). Vicente Guerrero and his army manages to kill the first emperor of Mexico (warning it is very dangerous to be head of state in Mexico). Vicente Guerrero eventually became president himself, and was pretty popular, until he wasn’t. SO if your not popular and your the head of state of Mexico, you are going to get shot, and so he was. Although he wasn’t popular enough to live, he was popular enough to be remembered, so the region of Tecpan was renamed Guerrero and that has forever been the state’s name.

Today, like back then, Chilpancingo (and the rest of the state of Guerrero) is known for being rough. When I was in Chilpancingo, which is the capitol of Guerrero, I went to the governor’s palace. Well, I should say I tried to go to the governor’s palace, but it was chaos. It seems that in 2014, 43 students were protesting and they just disappeared and rest of the country of Mexico is still not happy about it and there were people with machetes camping out in front of the palace to let the government know they didn’t forget about those 43 students. On the other side were National Guard with rifles warning the people with machetes that they would also be missing if they stepped any closer. A real story, I for some reason got the idea that I really needed that photo in front of the palace and both the guys with the machetes and the guys with rifles let me, but they didn’t let my taxi driver, so I had to walk to the palace, I got the picture.

Which is really important because if you are at the right party in Chilpancingo there will also be very good food. Some of the specialties of Chilpancingo are Pozole (a soup), tacos de cuerito (pig crackings), and enchiladas that they like to serve with hard boiled eggs and lettuce. 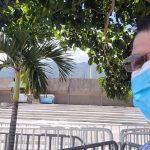 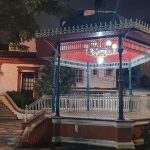 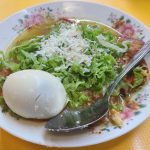 Egg, enchilladas, salad, and soup, all in one plate. 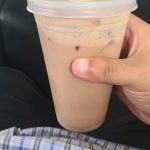 This is a cacao bean drink, very energizing on a hot day. 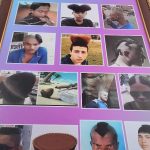 I went to a barber and saw these more unique styles being offered. 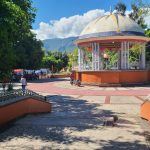 Sometimes you want to salsa dance after. 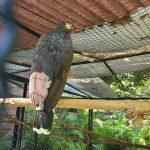 A Mexican Imperial Eagle, this is the same eagle that is on the Mexican flag.

I know it sounds dangerous, but the truth is it really isn’t, unless your looking for danger, then it really can be (don’t run for head of state), but you probably will not find any trouble. The name Guerrero translate to warrior and that sounds harsh, but the locals are also really good people. I guarantee if you ever go to Guerrero, whether it is Chilpancingo or the very popular Acapulco, you will have the best time if you just respect the people and go with the flow. You do that and you will have the greatest time ever and you might learn how to salsa.

A Video About Chilpancingo: