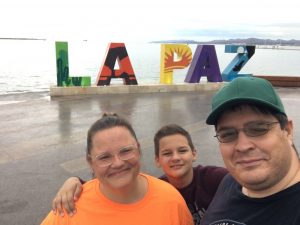 It didn’t take Hernan Cortez to get the itch to keep moving after he finished taking out the Aztec in 1521. For the next ten years he spent his time mopping up minor rebellions and angering the Spanish government set up in Cuba, who didn’t want him to be in Mexico in the first place, but then exactly they didn’t give back the land either. 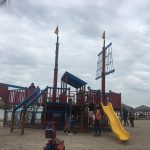 A playground that reminds you of the early colonial efforts.

In 1533, Hernan Cortez sent two ships to explore the west coast of Mexico. The new Spanish Viceroy, Antonio de Mendoza, thought this was going to end up in more Spanish warships being destroyed so he sent him a letter on September 4, 1534 saying “not to confront he had requisitioned his ships”. Hernan Cortez replied by saying the King sent him to explore, not to sit at home so he took the kings ships and went to Baja.

The trip was a disaster. A port was found and Captain Fortún Jiménez was the first Spanish person to set foot on land in Baja. The natives immediately shot him in the head with an arrow.  A battle immediately started, the Spanish did eventually win, but the colonists were a long way from mainland Mexico (it took them a week of sailing from Mazatlan). The Viceroy didn’t want 100+ colonists to die so he sent some supply ships. The supply ships got stuck in a storm and only one made it to land, it had only 50 bushels of corn. This was not enough to feed the colonists, who were forced to flee. The natives gave them a nice goodbye party, filling the air with arrows as they left. Francisco de Ulloa, who was sent by the Viceroy to rescue the colonists, decided to give the abandoned colony the name of La Paz, The Peace. This was meant as a joke, but it stuck. 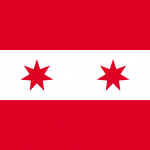 This was the Flag of the short lived Republic of Sonora.

Technically Baja was now Spanish territory, but it would be a long time until there was any meaningful Spanish presence in the area. For hundreds of years La Paz basically was a small fishing village. This would be significant because later when Mexico took over they didn’t really establish much of a government either. In fact in 1847 during the Mexican American war a group of Californians tried to claim Baja as part of the USA, but that failed (more about that in a later post). The Californians came again in 1854, and declared La Paz the capital of the Republic of Sonora. To which the natives said, “yeah right”, and then refused to give them any food, so the group disbanded and went back to California and Baja went back to being part of Mexico. 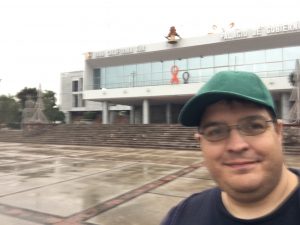 Baja is probably most famous for the Baja 1000, which is an off road race from Ensenada to La Paz. The old route, which is known as the Transpeninsular Highway (Hwy 1) was paved in 1973. Baja California Sur became a state in 1974. We drove, but most people come to La Paz after flying first to Cabo San Lucas, but there is an airport with non-stop flights from LAX into La Paz. 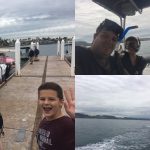 Being on the sea is the normal thing for La Paz.

Unlike it’s early days (and not on race days), today, La Paz fits the name. At about 220,000 residents, it is not a small city, but walking in the city you still feel like your in a small town. This is because the roads are small, winding, and kind of sectioned off. There is a governmental downtown area, a beach area, and the resort areas.

Most foreigners go to Cabo San Lucas because the biggest resorts in Baja California are on the tip of the Baja Pennisula. Besides the Baja 1000, other attractions in La Paz are swimming with whale sharks (biggest fish in the world), playing on the beach, fishing, and eating fish tacos. It is a great place to be out on the water. It isn’t an island but the with the big desert to the north the entire tip of Baja does kind of feel like an island. 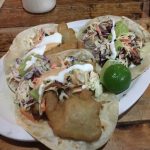 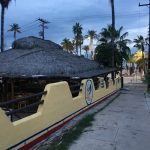 Eating under a palapa is the place to go in La Paz. 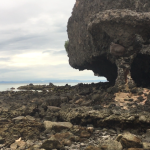 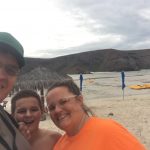 Balandra is one of the most famous beaches in Mexico.