I grew up in the not so small city of Chula Vista. Translated from Spanish the name means “beautiful view.” So it isn’t so much of a stretch that Chula Vista’s oldest restaurant would be named La Bella, which is Italian for the “the beautiful.”  A lot of things have changed in the city of Chula Vista but not La Bella’s (only people from out of town try to pronounce it without the s). 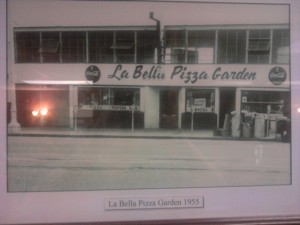 Really, it’s been there that long.

Literally, La Bella’s Pizza has been around since before I was born. It kind of reminds me of an old John Mellencamp song in a way. Come to think of it, it will probably be there after I die too. To say that I have many fond memories of the place is a given. When I was a cub scout our pack would hold it’s Blue and Gold Banquet upstairs. The first time I ever saw an arcade machine was while waiting to be seated up front. My favorite memory was when this drunk guy came up to my family and declared he was Jesus. Trying to get him to leave we gave him a piece of pizza. He looked at it as if it was a foreign object then it raised both of his hands in the air (with one of them still holding the piece of pizza) and with a prophetic voice declared “AND JESUS ATE THE PIZZA!!” and then left. We waited until he left but then started laughing hysterically (totally worth the slice of pizza). I don’t think that guy was actually Jesus, but if he was I am going to have one whale of a tale to tell in heaven!! (assuming I don’t get banished first for having laughed at Jesus behind his back…) 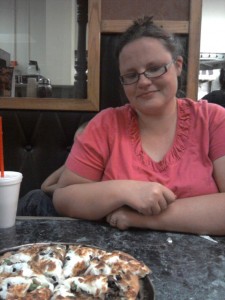 Denise didn’t get the admiring the pizza thing, but she played along.

There are two sections to La Bella’s, one is the cafe and the other is the  the other is the pizzeria. The cafe is the newer part of La Bella’s, I hear it is nice, but being a traditionalist I always eat in the pizzeria. With a place so steeped in history it is not surprising that La Bella’s Pizza comes with a lot of tradition. The first weird tradition for me is despite the fact that La Bella’s has a perfectly good and working front door I have never used it. Which is funny because to get seated you have go to the front door. I am not sure why I don’t use the front door at La Bella’s. Maybe it is haunted. Perhaps it is because I like to stare at the picture in the lobby that says that I am standing on the spot that used to be a miniature golf course. Maybe entering through the back makes me feel like I am more than just an average customer. It is probably is just because parking in the back doesn’t require me to pay the parking meters that are on Third St. I just don’t really know, but I know I don’t enter through the front door. 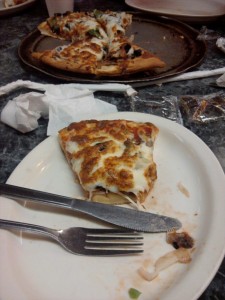 You can eat it all with your hands but that would be breaking protocol.

I do however know that when at La Bella’s I cannot eat the first bite out of my slice without first cutting it up. This is not normal, but it is if I am at La Bella’s. If I could use just one word to describe a La Bella’s pizza it would have to be “CHEESE!!” You can order extra cheese on your pizza, but that would just be ridiculous. Which by the way, if you want to see ridiculous cheese, try ordering the lasagna, they say there are noodles in that dish but no one has ever seen them because of all the cheese. Anyhow, going back to cutting your pizza… You see, if you don’t cut and eat the first bite of your La Bella’s slice with a fork and knife your going to find that when you pick it up all your toppings are going to fall off because they have gotten stuck to all the cheese that was previously on your pizza slice. Which would be a shame because you would miss the next best part of a La Bella’s pizza and that would be the sauce. A zesty tomato blend, it definitely sets makes the pizza even more unique. A this point I should mention that La Bella’s is not the cheapest place to eat pizza, but it isn’t the most expensive place either (BTW, I was NOT paid to write that). For $20 we got a medium pizza and two clam chowders. Normally, I wouldn’t recommend seafood with your pizza, but when you are less than two miles from water it somehow makes sense (not too mention the clam chowder is really good). 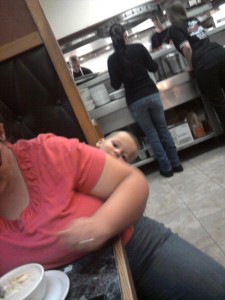 The best part of La Bella’s is the atmosphere. I think it is due to the decor (gotta love those black vinyl cushioned wall benches), but it is a very mellow and casual place. It is not uncommon at La Bella’s to have either a server or guest just start randomly talking to you. Heck, if you are me, you’ll probably be the one initiating the conversation. The whole place screams “good times” at you. If you have a little bit of time and little bit of dough (yes, that was yet another pun) I highly recommend you check it out.