↓
Home→Uncategorized→AJ Will Not Be Going to Church Tomorrow

The good news is AJ has not become a 3 yr. old apostate (like he would even understands what that word means), but the bad news is AJ is sick today.
I had to go down the hill (why we call it a hill is beyond me, but that is for a different discussion) for a Merit Badge Workshop and so I caught a ride from another leader and Denise picked me up later at a nearby Mexican food places (it is all about the torta). Anyhow, so I go into the car and this is what I saw: 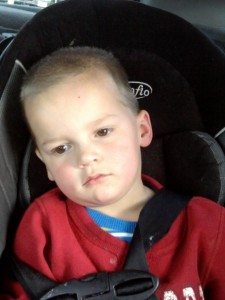 [rss-cut]
This may not look bad to the untrained eye but as a parent you know when your kid doesn’t look well (if you are interested in seeing what a healthy AJ looks like wave your mouse over the above picture). Nothing major, so far it is just a minor fever and a bunch of coughing, but definitely enough that AJ doesn’t need to be out in public.
Needless to say it was time to get AJ home. When we got home we asked AJ if he wanted to take a nap and he of course responded with his usual “no nappy!” So we let him stay on the couch. About 30 mins later Denise told me I needed to look for AJ and this is what I saw:

Denise said that AJ was in there somewhere so my solution was I just took the entire lump and put it to bed. He didn’t stir at all when I did this, yet further proof positive AJ is not feeling well. Usually, when I so much as point to AJ’s room he acts as though I have sentenced him to a hundred years of torture.
The next question of course is if AJ is not going to church tomorrow who else is not going to church. I suppose we could leave him home by himself, but that would probably land us a visit by a social worker. In order to avoid having a social worker have to work on a Sunday we have once again decided to use the divide and conquer technique. We will be alternating hours in church. It isn’t the best solution but at least each of us gets to go to at least one hour of church.