↓
Home→general→Chewy Pretzels and Super Bowl Do or Do Not Mix?

I heard that the Green Bay Packers won the Super Bowl. I only know this because I logged into Facebook today. Otherwise I wouldn’t have even remembered that the Super Bowl was going on. What was I doing today you ask? Well, besides going to Church I was baking. I know what your thinking. That is an offense worthy worthy of taking away the “man card.” Save yourself the jury, truth is I probably lost it a long time ago. You would think with a last name of Pedroza I would be super macho, but I am not. Unfortunately when it comes to the “man card” test I can readily identify many flaws. I am not good in sports. I like going to games, but I don’t really follow any team and I could careless about watching any sport on television.

I think the problem started in the 8th grade I had time for an extra elective. I went to a private school at the time and there were lots of options for me. Being that I was in Mexico City the cool thing to do was to join the soccer team. If you couldn’t get on the soccer team than you needed to tryout for the football team. At the very least if you were not athletic most guys would try to get something cool like woodworking into their schedule. Not me, I chose home economics… Not a choice that came without it’s perils. When my friends first my schedule their first reaction was that of denial.

“There must of been some sort of mistake,” Steve called out. Nope, no mistake that is where I wanted to go. Then came the look of horror.

“You’re not gay are you?” Fred questioned. I did my best to assure them that I was not gay, but in Middle School World it was too late. Soon shunned, I soon found my popularity plummeting. It was ok though. I had a plan.

Unlike most of my middle school career, the choice to take Home Economics was not one made without any planning. As a 7th grader I had taken Woodworking as my elective. For a long time I didn’t even notice the small classroom. Then one day it hit me, there was a smell in the air. I knew that smell, it was good. What was that smell?? It was cookies!! Fresh chocolate chip cookies. Being the ever hungry teenager that I was I looked for the source of this smell. It was coming from that small classroom that I passed on my way to Woodworking. Looking into the classroom I made my next discovery, there were girls in that classroom. A bunch of pretty girls and not one boy in there.  It didn’t take long for my teenage mind to add it all together. Good food and pretty girls, what more did I need.

Yep, I think I lost my “man card” that year, but it was ok. Mocked as I was I had more dates than any other teenager I knew. I was never the most popular person in Middle School or High School, but I didn’t have the same problems other young men seemed to have. I knew how to talk to girls. More importantly I knew what to talk about. I never did figure out everything there was to the opposite sex, but I also learned that is impossible (it’s a lot less frustrating when you know your limitations). And, I learned how to cook. In fact I would say I am a pretty good cook. Not the best cook in the world, but I have never gone hungry in my life (and unfortunately that shows).
So, I guess that is a very long story about not wanting to watch the Super Bowl. Oh well, it’s my blog and I will post what I want to (not many people reading anyway). I guess the real question is what was I baking today. Well, I was baking Chewy Pretzel bites. I found the recipe at Mel’s Kitchen Cafe (www.melskitchencafe.com). They came out really good: 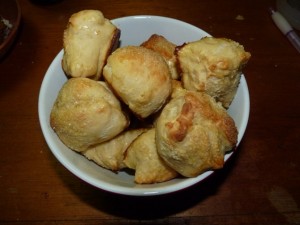 Crunchy on the outside and chewy in the middle.

If you like making bread, you will find that these are really easy to make (it’s amazing how far a little flour and yeast will go). You can find the recipe by going HERE.  Ironically, Chewy Pretzels would make for a great snack for a football party. Oh well maybe I can just eat them while watching “Better Off Dead” (I want my two dollars…).