I don’t know about normal families, but in my family you often acquire many different names. When I was groing up you couldn’t get by without acquiring at least a half a dozen of them. When you have a last name like Pedroza and half of your family lives in Mexico and you live in the US it comes as no surprise that I would be bestowed the name: 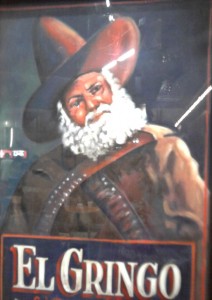 Yep, I may speak Spanish, I may come from a deeply rooted Mexican family, but there is no doubt that I am a Gringo. Actually, there is another word, but it is worse, so I am not going to mention it here. I mention this title because everytime I hear it, it reminds me of the first time I had “Mexican Food” in Utah. It was in the winter of 1996 and I was in the college town of Provo. I went to this place called “El Azteca.” I don’t know if it still exists but I have to say it was one of the worst meals I have ever tasted. They had tacos there but they were all hard shelled tacos. I don’t know who came up with the idea that idea that a tortilla needs to be in a hard shell format, but it was a bad one. After having made that mistake at my local Taco Bell I opted for a Chimichanga. I didn’t know at the time what a Chimichanga was, but it would be my first and last. Basically, it is fried burrito. All I could think of while eating it was why?? Anyhow, I wont go into more detail but I will say that it was horrible. It was ok though, I figured Utah being a landlocked state couldn’t help it. It was strange to me that Utah didn’t have any good Mexican food because there are a lot of Mexicans in Utah, but I guess Mexicans in Utah weren’t into cooking at the time.
Flash forward to 2003 and me and my newly wed bride decide to go up to Utah to visit her family. All was going well, we visited Temple Square, we saw Brigham Young’s house, and then she decided she wanted Mexican food. Being rather puzzled, I told her I wasn’t driving 9 hrs. back to California, giving me a puzzled response she told me that all we had to do was go to Provo.
“Provo?” I asked. Knowing that I must quickly intervene I quickly related my story of the Chimichanga. She responded to the story by calling me silly and told me that we needed to go to some place called Cafe Rio. To say that I was skeptical was an understatement, but not wanting our first fight to be over Mexican food I reluctantly agreed. 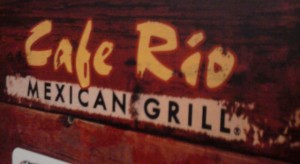 Surprisingly Cafe Rio turned out to be really good food. Despite the title “Mexican Grill” I wouldn’t call it Mexican (let’s face it Mexican’s don’t do giant flour tortillas), but it’s good food. 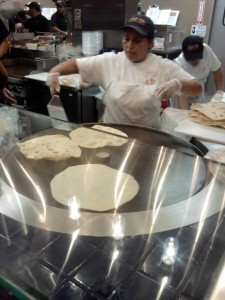 Who knew flour tortillas did disco? 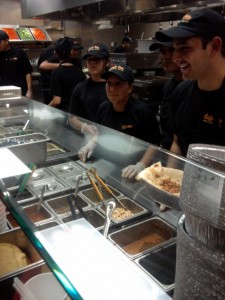 Basically, Cafe Rio is just like Chipotle’s in that you stand in line, your start with a giant tortilla, you tell them what you want it filled with, and maybe add a soda or dessert at the end. 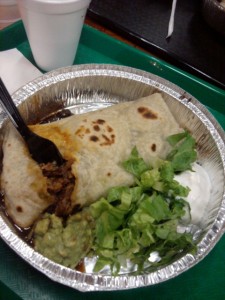 In the end you get a big giant burrito. My favorite burrito is their pork barbacoa burrito with a side of guacamole. Now I know that barbacoa (it is usually sheep) isn’t supposed to be pork but once you taste the citrus marinade you will soon forget that. Add some extra pinto beans and you will soon forget about your poor Mexican ancestors who are undoubtedly rolling in their graves. If your going to give up your heritage it better at least be tasty right??

As mentioned the first Cafe Rio that I knew about was in Provo, Utah, but the chain has slowly been making it’s way down into California. The one we went to in Redlands, California had just opened. As I mentioned the food is really good. It isn’t authentic, but it’s good. A typical burrito will set you back about $7.00-$8.00 after taxes, which might sound like a lot, but considering how big they are I think it is still a good value. Utah still might not have Mexican food, but Cafe Rio is definitely a step in the right direction.