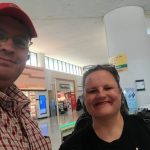 We booked our Baltic Cruise back in February of 2022. Back then things were good if you were a consumer and had some extra money. All the deals were in full effect. Travel companies were practically tripping over each other to give you deals. Norwegian Cruise was having a deal where they included almost everything. In got free internet, free specialty dining, free alcohol (which we turned down), and most importantly free flights.

The first thing we were alerted to that there might be a problem was when we were 3 months out and we hadn’t received our flight confirmations. We ended up getting our flight confirmation 25 days out and then a week after we got our flights we learned that the aircraft carrier, SAS who had our direct flight from LAX (Los Angeles) to CPH (Copenhagen) was about to go on strike, but they wouldn’t officially cancel our tickets until 2 days before the flight. The strike did happen though and we were forced to get last minute with a combination of flights with United and Lufthansa. 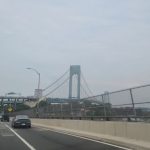 The cool part of going between New Jersey and New York is going over the bridges. 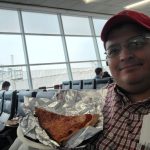 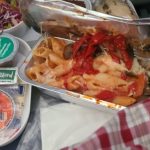 This is the food we got on the Lufthansa flight. It was OK. 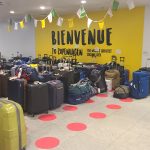 It was crazy how much lost luggage we saw. 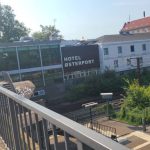 Hotel Osterport was very well located, but the trains were noisy.

The route we ended up getting was a flight from LAX to LGA (New Jersey). Then we had to get a taxi from New Jersey to JFK (New York). It was an interesting drive though because we went through both Staten Island and Manhattan.

The next flight was from JFK to FRA (Frankfurt, Germany). It was very apparent that Lufthansa was not happy about receiving all the extra passengers. It was also interesting that we had to wear masks on the German flights. The connection flight from FRA to CPH (Copenhagen) was very tight. Only an hour to go from gate Z22 to A1 and we needed to officially stamp into Europe. It was race with backpacks fully loaded but we did it.

After 24 hrs. we just wanted to crash at our hotel, but apparently that got canceled too, so we had to get a new hotel while were traveling, thank you airport WIFI. Things worked out because we ended up finding the hotel Osterport. It was good hotel, centrally located, a little expensive, and we got some train noises, but it was right across the street from a metro station with a 7/11 with amazing pastries.

As much as I would have liked to sleep, we only had 24 hours in Copenhagen, and we wanted to see as much as I could, so we decided we would take a nap, and then go out and see what we could for 24 hrs. in Copenhagen.