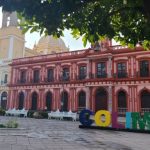 Colima, Mexico is an interesting place. Like many states in Mexico, the capital city and state share the same name. When I told my Mexican cousins I was going to Colima they told me “Why are you going there?” and for the most part they are right. Most people going to Colima don’t go to Colima, if they go anywhere in the state, they go to Manzanillo, which is a major resort and beach town in the state.

Colima isn’t a place I would suggest to someone who is new to Mexico, in fact, if you go to the US State Department’s website, there are warnings against the entire state. At the same time Colima is a place I would go to learn about Mexico. I think this has to do somewhat with history of the state. The name of the State comes from the Colima tribe, who were the original inhabitants before the Spanish came. It is said that King Colima fought fiercely against the Spanish Conquistadors, but in 1524 Colima became part of the third Mexican colony k own as La Nueva Galicia (the new Gallegos). As such the Spanish colonial has a strong influence on the city, but even more felt is the two volcanos that are on the outskirts of the city.

On the edge of the city is the archeological zone of La Campana, which is one the larger of two archeological sites in Colima. They call it La Campana because the first pyramid they found was round like a a bell. The archeological site was first discovered and explored in 1917, but it wasn’t unt 1988 when anything significant was discovered. The reason for this was because much of La Campana was destroyed, not by a person, but by the volcano. Volcan de Colima, is actually a trio of volcanos known as the Volcan del Fuego, Nevado de Colima, and El Cantero. The three volcanos are Mexico’s most active volcanos, with an eruption happening about every couple of years. Which is why the argeological zone of La Campana to be half destroyed. The ancients would build, the volcano would erupt so they would flee, then the volcano ashes would make dirt, so they would come back, and so the cycle was constant. In visiting the site you can see that there is Purepeche, Nahuatl, and Tenotichtlan influences. 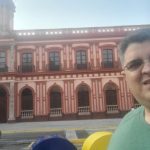 In front of the Governor’s Palace.

The Governor’s Palace’s color is a little bit controversial because it doesn’t match the rest of the buildings. 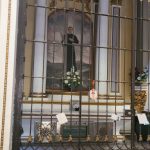 People leave messages at the tomb of San Miguel de Morra after receiving a miracle. 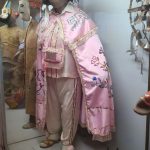 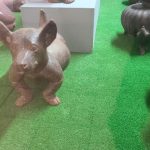 The Techichi dog is an extinct pre-hispanic dog that was related to the Chihuahua. 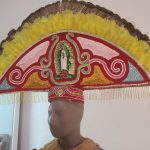 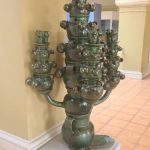 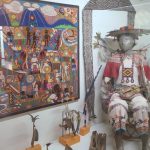 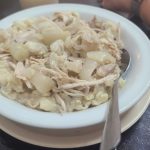 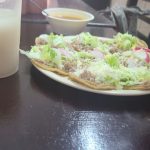 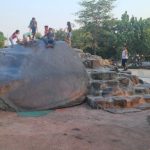 Legend says if you slide on the Piedra Lisa you will return to Colima. 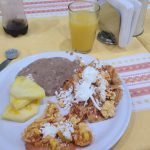 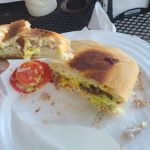 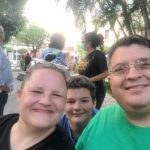 Everyone hangs out in the plaza at night. 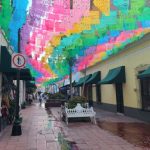 Mexico is full of color. 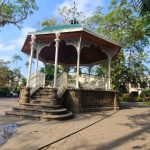 At night in they play music in the bandstand. 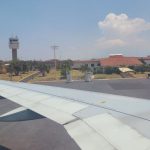 Colima has a very small airport, just one gate. 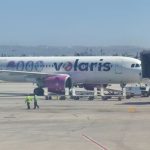 Our Ghostbuster plane was cool.

The state of Colima is the fourth smallest in Mexico and at a total population of about 700,000, it is the least populated state in Mexico. The capital city has about 150,000, which is small and the people are humble, but they are full about tradition. Unlike other places in Mexico that have maybe forgotten their traditions and now are rediscovering them, the people of Colima are doing the same thing they have always done. A great example of this in the the food. A Colimense (that is what they call themselves) loves to start the day off right and to do that you have to have a good breakfast. Don’t worry about finding some place to open, there are hundreds of breakfast places in Colima. A typical breakfast will include chilaquiles (salsa covered tortilla chips), eggs, beans, and some fruit (probably plantains or pinapple). Another popular thing in Colima is a thing called a cenaduria, which translates to diner. Typical dinner food in Colima is pozole seco, which is interesting because pozole is traditionally a soup, but pozole seco is like grits with pork. Other traditional foods in Colima include sopitas  (kind of like mini tostadas) and enchiladas.

The majority (87%) of Colima is Catholic and not surprisingly there are a lot of Catholic churches around the city. The main Catholic church in Colima is the Cathedral, which was given Basilica Minor status when John Paul II visited in 1998. The cathedral is dedicated to the Virgin of Gualadupe and has a nice organ. What I found interesting was a little chapel in the back dedicated to the tomb of San Miguel de Morro. He was a priest that was killed in 1927 during the Cristeros war. The Cristeros war was a war that happened between Mexico and the Catholic church. It is interesting to me because usually Mexico and the Catholic church are very close, but back in the 1920s Mexico took land away from the Catholic church and it caused some bloodshed. The chapel/tomb now is visited by those who are seeking a miracle and when they get it, they post a thank you note on the gate of the chapel.

My favorite time in Colima is the afternoon between 5pm and 10 pm. At that time the heat of the day is over and it is cool enough to walk around, which is what the rest of Colima does. At that time you can walk the main streets and they are all busy with people going about their business. It is fun to go people watching in the plazas. On our last night there, which was a Sunday, we went to the plaza next to the Governor’s palace and they had a local band playing. The locals were happy to have us there and lent us some chairs so we could stop and listen to the band. As the band got faster, so did the people and many started to dance. The people of Colima are a generally happy people, which is also interesting to me. If you ask them about the troubles that have happened in the city and state they will tell you it comes from the outsiders, not them. All they want to do is work hard and have a good life.