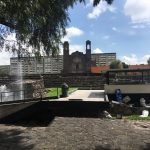 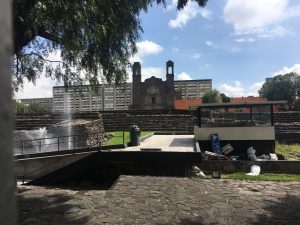 Tlateloco has always fascinated me as a place in which you can get a physical representation of how civilization is constantly evolving. From a young age my father always indoctrinated the idea that Mexico was the birthplace of one of the original civilizations. Having been born on the USA/Mexico border, I feel like I am very sensitive to the concept of being in the middle of things. Civilization to me is a constantly evolving thing. The idea of a civilization to me is not a static thing. Things do not come from nothingness they have stories, they have pasts, they are also in the future, and all of this blends together and becomes a now. This now is often hard to perceive but sometimes there are places that are more evident than others. Tlateloco on the hand is an exact representation of how civilizations can merge and even though the result looks like a clash of cultures, it is really just a merging of those cultures.

Last Saturday we had a brief visit to Mexico visit my Dad. During our brief visit I was able to walk the area of Tlateloco and get some video (as well as an ice cream cone!). It inspired me to write a brief essay on the topic. I wrote out those thoughts and made a small video. Hope you are at the very least entertained.

A Brief History of Tlateloco

On February 10th 2009 Mexican archeologists discovered a mass grave of forty-nine human skeletons. All laid out in in neat lines and rows on their backs, with their arms crossed, wrapped in maguey leaves. Who were they people? Why did they die? The first clues came from the bodies themselves. Studying the bones scientists were able to identify that the bodies consisted of 45 young adults, two children, a teenager, and an elderly man who was wearing a ring that signified a higher status. Most of the young men were tall and several had broken bones that had healed, characteristics of warriors. Further research of the bones revealed that they had died somewhere between 1500 to 1545. The remains of a last battle that would mark the end of an era of a culture that was born in the Americas.1

Tlateloco finds it birth in 1337 by a group of Aztecs who where not happy with what was happening in Tenochtitlan, which was at the time a growing Aztec capital.  It is said that an eagle flew from the main temple known as Templo Mayor and landed on mountain of sand known as a Xaltelolco, this was taken a sign from the heavens and the name would eventually become Tlateloco.2

The location located on the edge of the lake Texoco proved to be very fertile ground. The inhabitants learned first how to fish but then quickly moved on to agriculture. An abundance of crops mingled with a strategic location made Tlateloco a center of commerce. Besides the building of another Templo Mayor, just like Tenochtitlan, Tlateloco was known for it’s grand market place.

Like two sisters Tenochtitlan and Tlateloco grew right next to each other. Unfortunately, just like most children there was growing pains. In 1426, what could easily be called a civil war started between the two cities. This war ends in the year 1428 with the triple alliance of Tenochtitlan, Itzcoatl, and Azacapotzalco.3

Firmly with in the arms of the united Aztec empire it would be the market of Tlateloco that would drive the economy of the Aztec empire. Having conquered the entire region were able to bring in exotic goods from throughout the continent. It is estimated that between 20,000 and 60,000 people were in the market daily. The troops of Spanish Conquest arrived to Tlateloco in the year 1519 and described the market by saying “We turned to look at the great marketplace and the crowds of people that were in it, some buying and others selling, so that the murmur and hum of their voices and words that they used could be he heard more than a league off. Some of the soldiers among us who had been in many parts of the world, in Constantinople, and all over Italy, and in Rome, said that so large a marketplace and so full of people, and so well regulated and arranged; they had never seen before.”4

The coming of the Spanish soldiers marked the end of the Aztec empire. By 1520 the Aztec capital of Tenochtitlan had fallen to Spanish hands. Moctezuma II was killed and Cuauhtémoc was elected tlatoani (main king). Cuauhtémoc and his troops made their last stand in Tlateloco, where it was said that even women took part in the battle. On August 13, 1521 Cuauhtemoc was captured while crossing Lake Texcoco. According to Spanish texts Cuauhtemoc on being capture requested Cortez take his knife and “strike me dead immediately.” Hernan Cortez refused stating, “You have defended your capital like a brave warrior…A Spaniard knows how to respect valor, even in an enemy.” In 1525, after years of torture Cuauhtemoc was hung and decapitated. With his death so ended the Aztec empire.5

The Spanish Conquerors decided that Tenochtitlan, the old Aztec capital would become the capital of Nueva Espana (aka New Spain) and Tlateloco would become the new Indian capital. Once again two cities, growing up together, but with very separate outlooks. To mark the dominance of the new regime, the market was transformed into a school called El Colegio de La Santa Cruz. The school was immediately started after the fall of the Aztec empire to help train the sons and daughters of nobility about the Spanish way of life. It was said by the Spanish soldiers that a vision of St. James rallied them to victory and so later in 1610 a temple to the Apostle James (Santiago in Spanish) was built. Dominant on the interior of the church is a painting of the Conqueror Christopher Columbus. Perhaps the school’s most famous pupil was Juan Diego. Juan Diego was a native convert to the Catholic church, who converted to Christianity in 1524. Inside the chapel you can see the baptistry font in it is said he was baptized. It would be a few years after his wife’s death in 1531, when he was said to have seen the Virgin Mary, known in Mexico as the Virgin de Guadalupe.6

Educating the natives proved to be less profitable than building a new Spanish colony and Tlateloco was soon converted to a cemetery. Mexico eventually gained independence from Spain in 1810. By that time Tlateloco and it’s past a great market was largely forgotten. The school and neighboring cemetery had been transformed into a Federal prison. By far Tlateloco’s most famous prisoner was Pancho Villa who on December 26, 1912 escaped by dressing up as a doctor.7

In 1960 Mexican President Lopez Mateos would accidentally rediscover Tlateloco by proposing a new housing development. In breaking ground for this new project, artifacts were found immediately and so and archeological dig was initiated in the plaza surrounding the Templo Santiago church. It would be the mix of the Aztec ruins, the Spanish Church and the one hundred modern 1960s apartment buildings from which the area would get it’s new name La Plaza de Las Tres Culturas (Three Cultures Plaza). In 1968 It would be in this plaza in 1968 that students protesting during the 1968 Olympic games in Mexico City would be massacred by federal troops. In 1985 Tlatelco was once again in the news as two apartment buildings collapsed and many others damaged. In the two minutes in which the earthquake rocked Mexico City 80,000 housing units were instantly destroyed.8

Today the Plaza of the Tres Culturas is a place of easy going neighborhood. It is a place where over 100,000 still live and go about their daily life. It is also a place of history. A place that despite seemingly being swallowed up by the city, still demands to be remembered. It is like voices of the unknown dead still speak to the living and ask to be remembered.