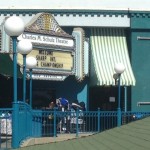 The Charles Shultz Theatre holds 2,085 people and they were filled to the brim.

Due to my very limiting interaction with cheerleading I have to say that I don’t really know much about cheerleading. Growing up I only remember personably knowing one person who was a cheerleader. She was cute and very energetic but she was not dumb and my most memorable moment was when I broke my arm she offered to carry my books for a week (which was no small task considering I didn’t use my locker). 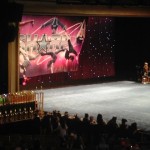 I don’t know much about SHARP, but my guess is they are making a lot of money.

It is funny how different worlds can intermingle without touching. As a family we go to Knott’s Berry Farm a lot. There are always different things going on at the park. Most of the events go on without us even knowing about them. The state cheerleading championships are quite a different matter. With so many people in bright uniforms, it was hard to miss them. I don’t know much about cheerleading, but I was able to obverse some commonalities within the group:
1) All uniforms must have some shiny metallic fringe to them. Silver seemed to be the most popular choice, but metallic pink was a close second. 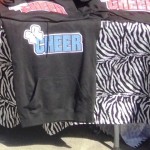 Even the shirts had hair bows on them.

2) All cheerleaders must have a bow on their head. The flashier and bigger the better. I saw some bows that I think were bigger than some of the girls heads.
3) Girl cheerleaders must have long hair. This of course gives some rationale to the hair bow. My guess is they also have a lot of hairbrushes too. Denise says there could have been extensions being used.
4) When receiving an award the cheerleaders will sit in a circle and start slapping the stage. I wasn’t sure if they were trying to do a drumroll or get out some pent up frustration, it was very confusing
5) There can be boy cheerleaders, but they will never be put to the front of the line and will mostly be relegated to “support at the bottom of the pyramid” role.
6) Despite the posted rules and continual notices by the announcer to not save seats, cheerleading moms rule the stands and they are going to save seats. Do not even attempt to ask how long the seat has been vacant because messing with a frazzled mother is about effective as trying to evict a grizzly bear from it’s den.
7) Being a cheerleader costs a lot of money. I don’t know exactly how much money but it can’t be cheap. To give you an example I can tell you that the competition fee was $67. I saw a very small hair bow (definitely not competition grade) going for $7 dollars. I can only imagine that the fancy uniforms, the coaching fees, and transportation fees have to add up.
8) If a Taylor Swift (aka. “T. Swifty) song is played over the PA system. Every cheerleader in earshot must stop and immediately sing along.
9) To be a cheerleader you must be extremely elastic. I am convinced some of those girls were made of rubber. I don’t know why the majority of these girls are not in gymnastics, it seems to me they could make more money. Maybe it has to do with the fact that they like bows, and gymnastics doesn’t have hair bows.
10) Cheerleaders will have a cheery disposition and are very outgoing. In a world where most girls are taught to be wallflowers I was pleasantly surprised to see outgoing girls. While in line waiting for rides we spoke to a few and they seemed to me to be very happy people. 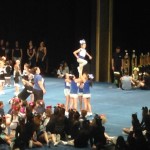 The cheerleaders were very good about watching and respecting the other teams while they performed.

Overall my take on the experience was a positive one. I know that there is a lot more to cheerleading than my casual observance. My take on anything I don’t know is to observe the result of the action. It was a apparent to me that with the shiny uniforms, big trophies, and even bigger hair bows that there was a lot of money wrapped up in cheerleading (SHARP is a big production). I also observed that there were quite a few adults that I think needed to relax a little. The best thing I think was my observation of how the cheerleaders themselves acted. To me they were very well composed young women. Very energetic and very outgoing, I wish more girls had those qualities. I am still not sure about the big hair bows, but if it is giving young women courage than I am all for it.