We went through the prosperity side on the left so I am hoping for big things.

A few weeks ago was my mom’s birthday. The plan was to ride the train into LA and go to Olivera ST and have some really good Mexican food. Unfortunately, she go sick so she didn’t go. We missed not going with my mom, but we didn’t have any other plans for the day so we decided to go anyway.

For us taking the train into LA is a no brainer decision. Driving into LA is not that hard to do, but it can often be a frustrating experience. Traffic is legendarily bad and parking is always hard to find (and often costs a lot). The other thing is that LA is kind of sprawled out, so unless you are going to just one place you will find yourself multiplying the process. On a normal day it cost $26.50 for a round trip ticket (kind of a lot), but on the weekend an all day pass is just $10. The weekend pass also includes all day access to the light rail and the dash bus system. 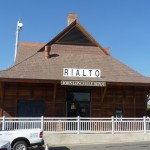 We got on the train at Rialto. Rialto Station was a very simple station. Most of the Metrolink stations are kind of simple. They are catered to commuters so there is usually a big parking lot and not much else. Rialto Station as a depot, but it was pretty sad. All it had was a few coin vending machines, a few tables, and a really old TV. AJ had fun running up and down the ramps, but other than getting to and from Rialto it was pretty simple.

Riding into LA we went up to the top of the train. This area is a quiet zone during the work week, but on the weekend it made for a perfect viewing area. Most of the scenery along the way was very industrial, but there were some interesting scenes passing by the mountains and watching people going about there business. In Covina the train is right in the middle of the freeway, which was funny because we were going faster than the stop and go traffic. 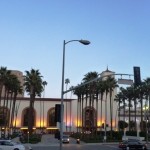 Love the view at dusk of Union Station.

Our first desination was Union Station. Built in 1939, Union Station is one of America’s most historical train stations. The building design style is called Mission Revival and it typifies the decorative elements of the late 30’s. The train station is a hive of activity with trains constantly coming and going. Go to the information booth and they will tell you almost anything you need to know about LA. Unfortunately, they told us that Angel’s Flight was closed so we needed to get a new idea. 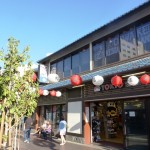 Something is always going on in Little Tokyo

As mentioned the light rail system is included with a weekend Metrolink pass. So we went to one of my favorite LA standbye places, Little Tokyo. Taking the Gold line we went to Little Tokyo. Our first priority was food and we promptly went to my favorite ramen shop Diakokuya. For dessert AJ had a pistachio macaroon, Denise had ice cream mocchi (ice cream surrounded by a rice jelly skin), and I had Imagawayaki (a red bean cake). While we had our various desserts we sat and watched shamisen (Japanese guitar) player. If you are interesting in seeing Imagawayaki being made or how a shamisen sounds check out this video: 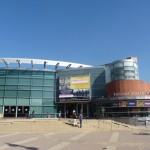 As luck would have it Target was sponsoring a family day at the Japanese American Musuem so admission was free. It was great, we got to see all the exhibits and AJ got to jump in the jump house and participate in the drum circle (what 5 year old would pass on an opportunity to bang on a drum).

After going to Little Tokyo we took the metro over to Chinatown. In Chinatown we looked at all the colorful food. I wanted to try the roast duck, but we were really full. So instead we settled on taking home some rambutans. If you ever get the chance to try a rambutan I suggest you do, there is a reason they were considered a food fit for royality. 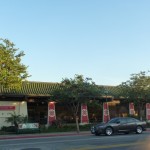 A Bank of America in Chinatown.

In LA the vista is always changing. Walking just a few blocks we soon found ourselves in Olivera ST. Where else in the world can you hear shamisen players in the afternoon, have marachi singers serenade you at dusk, and listen to a Cuban salsa in the evening. It was a great day out and we hope to do it again soon.

We should also mention that AJ has been learning about modes of transportation so this was a practical trip as well:

Here are some more pictures (as if we haven’t bored you enough):