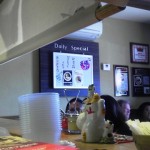 It is a very small place, but I came for the noodles not the floor space.

One of the greatest known fallacies to Marathon running is the idea of carbo loading before a race. Yes, you need a lot of energy to run a marathon and yes, noodles have a lot of carbs. However, the idea that you will run better because you ate a lot of them before a race is not true. The reality is you will probably become bloated and run worse.

That being said I love noodles. So if I can in anyway contribute to the eating of more noodles (even at the risk of bloated marathon runners) I am going to go for it. So, with that in mind I went out on a journey to find noodles right before I ran the St. George Marathon. 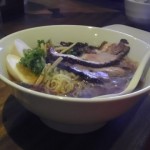 A good ramen is hard to find.

Although I enjoy noodles in many different formats I have to say ramen is one of my favorite forms. For those not in the know ramen is a soup based dish that originated in China, but became popular in Japan. Many people in the USA are familiar with ramen in the form of “Cup-O-Noodle”. While that is ramen, it is probably the worst form of ramen you can have (ever wonder why it is so cheap?). Luckily the secret to high quality ramen has been leaked out of Asia and fresh ramen can be found in the USA. In particular Southern California has become a hot bed of ramen activity as evidenced my the many ramen shops that have opened in California. My guess was that the idea of ramen has spread to other states, but not having seen ramen in other states I was starting to worry. 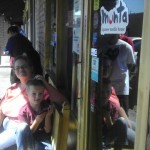 Be prepared to wait for a seat.

A good ramen is hard to find.[/caption] Luckily, a quick scan of Yelp let us know that the “city that never sleeps” was indeed in the know about ramen. This is how we found Monta Ramen in Las Vegas’ Chinatown. Like most of Las Vegas, Chinatown had the sincerity of blackjack dealer when they tell you “your doing a great job” (right as you busted for the 5th time in a row). OK, so the authenticity of the neighborhood was a little bit off, but I do have to say that Monta Ramen had good ramen. The base price was just under $8.00, but to get the type of ramen you see in our picture you would have to pay about $10.00 (it has an egg and nori). The noodles were definately manufactured, but they still had a good texture. The broth was not what I would call authentic, but more of a fusion syle. Salty like traditional ramen broth, but it had a slight sweet taste brought into the mix. Still not bad for someone looking to carbo load before a big race (and no I didn’t feel bloated during my marathon). Overall it was good deal and if you have some extra time (it is a busy place so be prepared to wait) I would check it out.