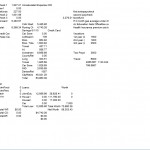 Today we finalized our budget for 2013 (Click here to see PDF) and created the new 2014 Generic Monthly Budget that will hopefully guide us for the new year. Overall 2013 was a good year for us. Following a strict budget we were able to come out with a positive cash flow. The goal to becoming totally debt free is not quite there yet, but with only the student loan left, it is certainly coming in view. The biggest factor in the budget is that after all is said and done and if we were to liquidate today our net worth would be $58,303 dollars. This is significantly up $43,690, which is what we estimated our worth to be in January of 2013. All monthly expenses are accounted for in the new budget and give us plenty of room to save in the upcoming year.

Negatives:
Not including basics (rent, tithing, utilities), the big purchases for 2013 were cars, travel, and computers.

In May our car was having some major issues. In just two months we had spent over $2,700 dollars worth of repairs in the car. Anytime you start spending that kind of money it is worth it to start looking into getting a new set of wheels. Luckily, we have been saving along the way and we had $12,000 in savings when this started to happen. Shopping around we got our 2010 Nissan Versa. It is an ok car. We call it our “automatic nothing car”. It is very simple. So simple in fact that the only keyed door is on the driver’s side. It is a little weird, but our car repair fund has been able to recover substantially this year so we are happy.

The next major expense we had this year was travel. Coming in at $3284 for the year it can mostly be explained in three different trips. The big trip for the year for us was down to San Diego for a family reunion in Julian, California. We spent a week down there visiting the Wild Animal Park, Sea World, the beach, and eating a lot of apple pie. John completed his goal this year of visiting all of the 21 California missions. In a crazy weekend driving adventure we saw the last 5 missions on our list all within the 3 day memorial weekend.

The last non-regular expense was computers. When it comes to computers we generally have ours on two year cycle. We tried to extend a little bit this cycle and our computers were about three years old. This probably seem very old to some of the family reading this (I recently had a conversation with a family member who was still using Windows XP), but for us that is a long time. If it helps to understand our reliance on computers we will say that we have no monthly phone or cable bill. Just one monthly $54 internet bill. For computers this year Denise ditched her laptop for a Tablet Nook ($120), I switched out my old laptop for a Windows 8 touch screen netbook ($400), and the best deal was refurbishing the main computer at Denise’s parents house ($50, Denise’s parents have a lot of spare parts).

Other non-regular expenses were several small car trips to various different places, but those we don’t track as closely so I can’t say exactly how much we spent. I can say that we did not go over our $1,200 allocated yearly budget for weekend travel.

Looking at the year I am grossing about $62,000 dollars. Actual net into the checking account is about $50,000 dollars. Not much, but not exactly the poor house either.

Main revenues came from my paycheck which is currently netting about $1830 every two weeks. John continues to work for the Riverside Police Department as a Police Program Supervisor. It is a great job with a steady paycheck and good benefits. Unfortunately, in today’s political environment public servants are enemy number one. As a public employee it is understood that you will not make any money. The deal has always been “we will pay you low, but we will take care of you.” Not anymore, It seems that cutbacks and layoffs are the new order of the day. John considers himself extremely grateful to be working for the City of Riverside. The City of Riverside was the only Inland Empire city that did not have to layoff some it’s workers. The paycheck did take a major hits as deferred comp (a 401K for government workers) was eliminated and our payment to health insurance doubled, but the pay check is still there and for that we are grateful.

Due to the cutbacks at work John is determined this year to make every extra dollar he can. In April he started his own Mobile Document Preparation Service business and is officially registered within the County of Riverside as a Registered Legal Document Assistant. Basically, that means he can legally help people file their own paperwork with the court (a lot cheaper sometimes than hiring a lawyer). He also does English/Spanish translations and designs website. The business is a slow start but right now it is at least breaking even.

In an effort to get rid of his stuff John has cataloged a big part of his “stuff” and started to sell it on E-bay. He has even gone as far as going to the local Goodwill, buying more “stuff” there and selling that on E-bay. So far after expenses John estimates that he has made about $500 this year. 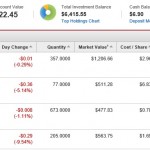 John’s biggest money maker so far has been stocks. The stock market in 2013 was what is known as a “raging bull” market. The DOW is at record highs, the NASDAQ increased by an unheard of 25%. Companies are running record breaking profits at the expense of their workers’ benefits. The federal government is buying bonds which make traditional gains from things like savings accounts, CDs, and bonds impossible due to low interest rates. Why the people allow this to continue is a political debate far beyond our perspective, but from a financial view it is an incredible opportunity. All that money is flowing in one direction and that current direction is stocks. John started in 2011 saving money into his cash stock account. At first it was nothing but losses, but this year is definitely different. Currently his paper value is $6,658 dollars in stocks. Yes, it could all crash down in a second, but considering he started with only $200 it is rather impressive. John isn’t a financial advisor and therefore will not be giving out any individual stock advice, but if your looking to safe stocks he would strongly suggest a simple S&P500 such as $SPY or $VOO (most of our retirement account consists of S&P 500 index funds).

Denise is thinking about activating her credential again and going back to substitute teaching on John’s 9/80 day off. Her hope is that with the extra money she can help supplement the grocery budget.

Continuing to save will be the order of the day for 2014. Due to the cutbacks at work we had to eliminate our weekend activities budget from the budget. To offset this a bit we increased each other’s personal budgets, but it means if one of us wants to do something fun on a weekend it is up to the person that proposed the idea to figure out how they are going to pay for it.

This does not however affect vacations which are still accounted for in the travel save budget. Travel however will be definitely reduced this year. We are planning for a trip to Aguas Calientes, Mexico in May to see the San Marcos Fair (largest fair in Mexico), but I doubt we will get to travel at all beyond that. It is too bad but that is what you have to do sometimes.

New budget categories for the year are AJ’s new education costs. Even though AJ goes to public school their are still costs involved. Everyday he buys lunch at the cafeteria and much to John’s dismay it seems that even at Kindergarten there is a new fundraiser going on every month. John and Denise both agree that they don’t like the idea of fundraisers at school. John and Denise don’t think the things paid for by fundraisers are bad, but if they are needed shouldn’t they be paid for by taxes? People like to complain a lot about how bad the education system is, but at the same time no one wants to pay for it.

Other than that we press forward.  We should note that this post only deals with our financial goals, there are plenty of other things we would like to do in 2014, but luckily not everything costs money. The whole point however is to do the most with what you have. Too many people avoid talking about money. One thing we do very well in our relationship is we have a very open ongoing dialogue when it comes to money. We don’t hide anything from anyone. We both don’t claim a perfect knowledge of all things. It is a constant ongoing process. We sometimes make very bad mistakes, but when we do we acknowledge them and go on. The way we see it is if you choose to stop moving forward you will next get to where you want to go.