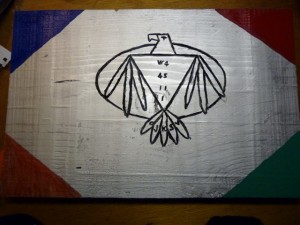 This is our patrol totem. Can you interpret it?

Or so the song says… To give you a full explanation of what Woodbadge would be very long, but in a nutshell it is basically extended training for adult Boy Scout leaders. It emulates a training program that Sir Baden Powell first gave in 1919. The course lasts 6 days and basically takes you through the different phases of the boy scout program. The Inland Empire Council’s Camp  is Emerson which is up in Idyllwild, California. After two weekends worth of camping and projects I have become a candidate for Troop 1. In order to become a permanent member I have to complete a series of 5 projects called tickets. I have 18 months in which to complete them.

UPDATE: Not only did I complete my ticket and become a permanent member of the Eagle Patrol, I became a Troop Guide and got my third bead. My new goal is to help all my new Woodbadgers to get their tickets completed.