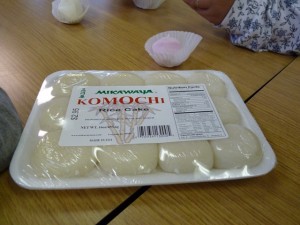 New Year’s Day around the world is pretty important, but in Japan it is their most important holiday. There are many traditions behind New Year’s Day in Japan, so many so that I will not even attempt to cover them all.
I can cover one of the traditions, that of Mochi. Mochi is translated from Japanese to mean “Rice Cake.” And that is basically all it is. As part of our New Year’s celebrations we went to Little Tokyo in downtown Los Angeles. The big selling item there was Mochi.
Mochi by itself tastes horrible. Well, not horrible, just horribly bland (think plain rice cracker with no crunchy). It has the consistency and look of a mini white hockey puck. I didn’t understand why they were selling like hotcakes and why they thought they were suitable for offerings in their temple. The only thing I could think of at first were that at least they are shelf stable. I don’t think those things could ever go bad, but then again why would anyone ever want to live their life eating such bland food. Then I discovered two exciting recipes.

The first one is Mochi ice cream. It was actually invented in Little Tokyo in a shop called Mikawaya. This shop is known as a “Wagashi” (sweets) shop. In this store they took the mochi and put ice cream into it (Japanese normally put sweet bean curd in the mochi). These little balls of ice cream are soo good!

They are just the right size and at a dollar a piece it isn’t really expensive. If you have the time and the opportunity you should try it. 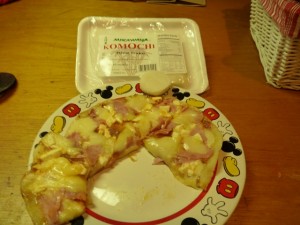 It's amazing how the little hard rice ball turns into a soft delicious pizza.

The other recipe that I just discovered was Mochi Pizza. Like I said before mochi by itself is like eating a mini white hockey puck. So making Mochi Pizza is almost like a chemistry experiment (except you can eat it when your done). It starts out hard, but with a little bit of oil and water you get this nice fluffy, crunchy on the outside, yet chewy on the inside pizza crust. If your interested in making it you can check out my video (thanks goes to Runny999, who is from Japan, who posted his video on how to make it):

Mochi is an interesting thing for me. I was ready to just sign it off as some weird Japanese tradition, but once I tried it I really liked it. I guess that is how life goes, you just can’t automatically sign off on something.
Here are some pictures from Little Toyko’s New Years Celebration (click to expand them):