So you decided you’re crazy and want to actually see how south you can go in Arizona. Well, then this is the post for you! Ok, here’s the story… As described earlier I was escaping a BYU football game and so I went to a mine museum in Sahaurita. Having missed the tour I had a lot of time on my hands. The mine museum was nice, but let’s face it, you can only read so much about rocks (unless of course your a Geologist, but I am not). Not really knowing what to do I decided to head south. At about mile marker 50, I started to notice two things: one, the terrain was getting surprisingly greener and all the license plates one the road were from Sonora, Mexico. For those not in the know, Sonora, Mexico is a state in Mexico just south of Arizona. If Sonora doesn’t sound familiar to you all I can say is that you don’t read the news much. So it was also at this time that I came to three more conclusions: 1) I didn’t have my passport with me, 2) I was driving a California plated car, and 3) I had just passed my 10th heavily armored distinctive green border patrol car. Not sure what to do at this point I decided I should probably turn tail and retreat, but then I saw this sign: 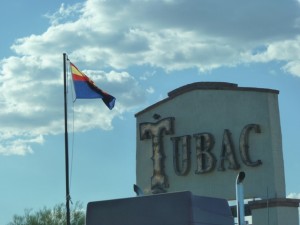 So it was at the sight of really shiny signs I decided to ignore my better judgement and pull over. In doing so I saw this: 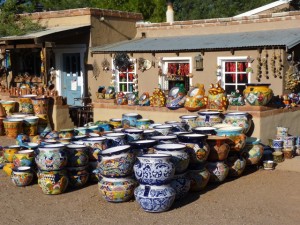 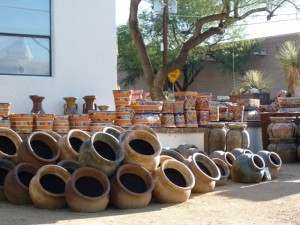 My favorite ones were these: 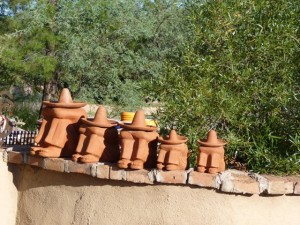 Despite all the pots the town was eerily empty. Just a lot of artists stalls and a few confused tourists. Apparently, the state of Arizona had anticipated this might happen and so I also saw this: 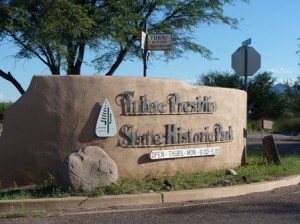 Reading more signs I found this: 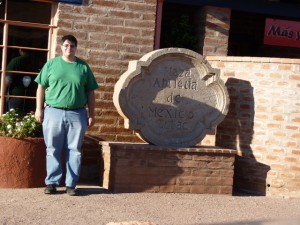 For those with Spanish deficiencies, it reads “Ancient Plaza of Mexico Tubac” (I bet you could have guessed that on your own, but I like translating). It turns out that the sign has some backing to it. Tubac Arizona was established in 1752, making it one of the oldest European establishments in the region. Not sure what the significance of that last sentence is, but I will say if you like colorful pots then Tubac is the place for you.
Slowly coming back to my senses I decided to get back on the road and head north, but then I saw this sign: 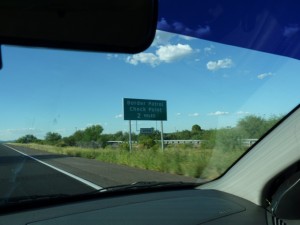 As I slowly approached (they make you drive really slow) the Border Patrol Check Point I noticed that they were not stopping any Arizona plated cars, too bad I was driving a California plated car. It wasn’t too bad. In fact, as far as being interviewed by heavily armed men I would have to say these were the nicest I have ever met. My conversation with them was rather brief, basically it went something like this: (I roll down my driver side window)
“Hello,” says the border patrol inspector.
“Hello, Good Afternoon,” I respond.
“On your way sir,” he instructs.
Luckily, I didn’t fit the look of a crazy drug smuggler (and I am glad I didn’t because those dogs didn’t look like Lassie). The experience was very surreal to me, I kind of understand why this is necessary, but I am not sure I would want to go that way again, it was a bit weird and a little too intense for me in my tourism mode hat. Seems like something more fit for the Ben Clark Training Center at work.