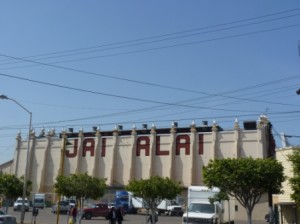 When I was a teenager I remember coming down to Tijuana and visiting Calle Revolucion with my mom. Back then Calle Revolucion was a party hub for American tourists. On the weekends the bars would be going 24 hours and the tourists would crowd the streets for cheap souvenirs, beers, and velvet Elvi. My mom and I would go to restaurants and fill up on cheap fish tacos until we were stuffed. After gorging ourselves we would walk up to the Jai Alai building and watch the competitors throw the tiny rubber ball. Then came the drug wars, 9/11, and strict border laws that would require every American to have a passport to come across the border. It would be many years before I would see this street again.
While we are here in Tijuana we are staying in the Centro (center) district. Our hotel is about a block and half away from Calle Revolucion. Since we were so close I couldn’t help but to visit this old haunt. The street is still there, the restaurants are still there, the bars are still playing the music, but it is not the same place I remember from my youth. First of all the American tourists are no longer there. I took a walk down Calle Revolucion and during the two days I took a walk I only saw two other Americans (both were there doing dental work too). The Jai Alai building is still there, but there are no more competitions. The Hotel Caesar is still a hotel, but the restaurant that created the famous Caesar salad is now a Carl’s Jr. The music still plays but no one is dancing. It is very surreal. It is almost like someone declared the party over, but forgot to tell the host to turn off the lights. As we walked down the street we were swarmed by very desperate vendors. The prices are posted, but you would be ignorant to pay the listed price, reasonable bargaining is between 20-30% lower than the listed price.
As far as safety goes we felt very safe the entire time we were there. The city has done a lot of work cleaning up this part of the town. There used to be a lot of beggars on Calle Revolucion, the police has run them out off the street. Also, the police has declared no open containers in public, I didn’t see any passed out drunk people on the street. I don’t drink or go to dance clubs, but I doubt even if I did, I would be leery of Calle Revolucion, the bars still look kind of shady to me. There still is a red light district, but it is much smaller and kind of hidden (HINT: don’t go past the aqueduct unless you are looking for trouble). Whenever you travel to an unfamiliar area you need to be aware of your surroundings, and Tijuana is no different. That being said however, a tourist taking proper precautions should not be too afraid.
Calle Revolucion is not the same place I remember as a youth, but that being said it is no longer in my opinion a place to avoid. The place has changed quite a bit and as long as you know what to expect you can still have a good time. As mentioned the prices are very low and there are plenty of bargains to be had. If you are looking for cheap food or cheap souvenirs this is the place to go. If you go on a weekend my suggestion would be to walk down to the aqueduct, there you will find a free amateur concert. Find a good restaurant (don’t worry they will come to you), order some fish tacos, and enjoy the new atmosphere.
For a preview here is a video we made: