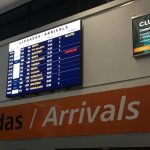 Something no one wants to see when they get to an airport.

As soon as I leave the house that is when vacation starts. In this case it started with a two hour drive to the Tijuana International Airport. We were going to try the Otay Mesa crossing but missed the exit to the 905 and ended up at the Chaparral (San Ysidro) crossing).

Getting to the airport was not bad. Parking was about $12, which is $8 dollars cheaper than parking at X-Border Express, not to mention we saved the $15 fee (one way) for crossing the bridge. Getting in the airport we were told that we needed to buy a tourist card. The cost was $30 dollars (each). Had we done a little bit more research we could have done this online for free since we were in the country for less than seven days. All you have to do is go on-line (https://www.mexicotouristcard.com/), fill out the form, print it at home, and stamp it at the declaration line. In the end the question was moot because at no time in this adventure did it ever get asked of us. Oh well, the $30 dollar version is good for 180 days (and I kept the receipt for proof of payment).

I should mention that we have Mexican car insurance,which is required if you are driving into Mexico. The cost is usually about $22 a day, but we have a yearly liability only (no one wants to steal our car) that cost us $250.

We got through security, which is a breeze in Mexico because you don’t have to take off your shoes and half the time they don’t care about electronics. I did still have to take off my belt.

After getting through security we looked at the departure board and saw something no traveler wants to see “flight canceled”. We didn’t know what to do so we started walking around the secured area looking for a Volaris worker. We went to the gate where the plane was supposed to leave but no one was there. Eventually we found a Volaris worker who told us that we would have to go outside the secured area.

We go outside the secured gate to the bag check-in. The Volaris representative confirmed that our plane to El Salvador, due to technical difficulties, had been canceled. They didn’t exactly tell us what those technical difficulties were, but considering our tickets only cost about $100, my guess is the “technical difficulty” was more of a cash flow problem. At any rate we were presented with three options: Go to El Salvador on Sunday (this didn’t work because it was a Friday and I had to be back at work on Tuesday Morning), cancel altogether and get a full refund (I didn’t want to go home), or go somewhere else (our options were Guadalajara or Aguascalientes).

We decided on Aguascalientes because we had relatives living there. The challenge would be getting home because the flight going back to Baja California on Monday left out of Mexico City. That gave us a three day challenge. What could we see and do in Mexico with three days and a just about $300 in cash. Turns out a lot.

I will try to do my best to describe what we did but this is mostly about Aguascalientes. For one day in the city we did a lot. We arrived early in the morning and although it took us awhile I was able to get in contact with my uncle who makes cheese. Lucky for us he has to wake up really early to get milk from the local farms. Denise and AJ took a nap but I took a little bit of time to catch up with my uncle while he was making cheese.

When Denise and AJ woke up, we went for a walk and we ended up at the regional museum. The regional museum took us through a mini-history story that started in paleo days and ended with the Mexican Revolution.Suffice to say Aguascalientes (which means hot water) has had a long history. After the museum, we followed the footsteps of my grandfather and hung out in the main plaza. I love the idea of the plaza and wish we had something similar in the United States. The plaza is just an easy place, almost always in the center of the city, where everyone can go and it is expected that you will interact with your community. There is music, vendors, tai chi, runners, it is a very active scene. After a $1 shoe shine (in which the guy thanked me for paying so much), we went to have some lunch.

For lunch we went to a place called Los Faros (the torches). Aguascalientes is known for beef. So we had beef in various forms. I shared a big plate of dried beef with three of my uncle. Denise had steak with nopales (flat cactus). AJ had Aztec tortilla soup, which he didn’t like because although it was tortilla soup, the Aztec version is very dense with extra spices (not spicy) and seasoning.

After lunch I participated in the most solemn of Mexican traditions, the siesta. Why don’t we have this tradition in the United States. It makes sense to me. You get a nice big meal in the middle of the day. Sleep when the heat is out and then finish out work a little bit later in the day.

As the sunset went down we decided to go visit an aunt and then took to Plaza and Jardin San Marcos and went out a evening stroll. Another Mexican tradition, everyone comes together at the end of the day to enjoy the cool evening air. Dinner is smaller than lunch in Mexico. We got a small snack of Eloteloco (tostitos with mayonnaise cheese, and corn) and a chocolate filled churro.

The churro was the perfect end to a beautiful day. I have had many churros all over the world but I have not found one as good as the little filled churros I get for $1 at the little plaza stand known as Churros San Marcos. The stand has been there for over 60 years, I know this because my dad remembers them when he was little and so do I. It is a family run business that is passed on from father and son and now has three generations going. 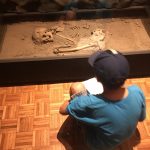 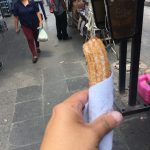 The best churro in the world hands down. 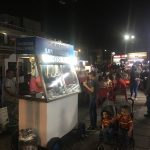 So good, so cheap… 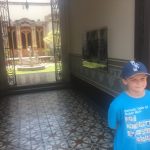 The Aguascalientes regional museum was in a converted colonial mansion. 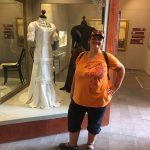 The regional museum finished with the Porfiriato. Basically it was a period of Mexican history where one man ruled for 40 years. 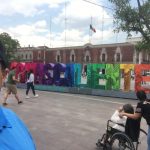 The plaza is the center of life of any Mexican city. 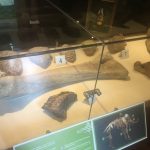 Apparently the history of Aguascalientes started with Wooly Mammoths. 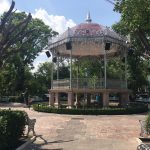 The Jardin de San Marcos is a magical place of peace and tranquility, except in April, then it is a den of drunk people. 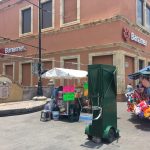 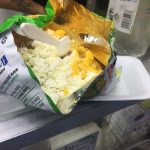 Elote locos are a crazy bit of cheesy goodness. 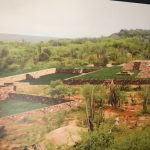 El Ocote is an ancient pyramid on the outskirts of Aguascalientes. 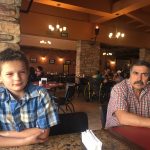 AJ and my uncle Carlos at El Faro 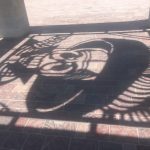 Skeletons are a big thing in Mexico, but they were born in Aguascalientes. 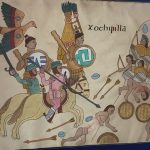 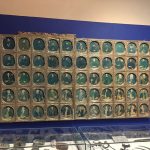 From Hernan Cortez in 1519 to the last Viceroy in Mexico in 1816, the Spanish influence in Mexico was long. 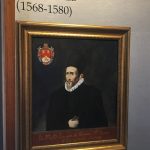 The first Spanish Viceroy in Spain arrived in 1568 in Aguascalientes. 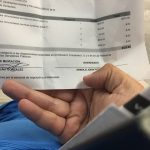 The cost of one Mexican Tourist Card in pesos.

We decided for our next day we would go to Guanajuato, Mexico by bus, so we retired in a good night sleep.