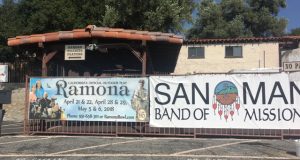 Ramona is sponsored by the local Native Americans.

Part of 4th grade education in California is California History. One of the traditions of that historical education is that 4th grade children get invited in April to the dress rehearsal of the Ramona Outdoor Play. This year was AJ’s turn but about 40 minutes into the performance it rained. Denise was with AJ as a chaperone at the time. I had other plans for that weekend but Denise and AJ were so sad that I (John) relented to their request and scrapped my plans and bought us all tickets to the Ramona Outdoor Play.

The Ramona Outdoor Play, but most commonly known as The Ramona Pageant is a play held every year on the outskirts of Hemet, California. The 2018 season marks the 95th year for what has been officially declared a California Historical Landmark (#1009). This California tradition started in 1923 and is based on a 1884 novel called Ramona by Helen Hunt Jackson.

The pageant costs $30 per ticket (or free if you are a 4th grader going to dress rehearsal) and is held every April and May in a specially made outdoor theater. Due to the fact that the theater is outdoor the play is interesting because it can only be held in the daytime and there is no curtains for each scene.

The complete show is three hours long. Which when I thought about it was really long, but due to everything happening in the play, you don’t really notice it. Being a pageant there is much more than just singing and acting. There are live horses, typical dances , a native american celebration, gun shots, and even a cannon.

The story is a romance story of this lady named Ramona who is trying to deal with her mixed ancestry and the evolution of California. Being that the screenplay was written in 1923, it felt a little patronizing, but it does a good job in summarizing the crazy cultural mix of cultures that makes California what it is today. 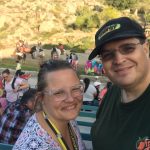 Taking a selfie at the end of the play. 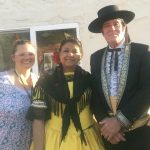 After the show we got to meet with some of the actors. 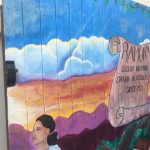 Continuously running since 1923, this is the oldest play in the nation.

Here is a little video of some of the sights and sounds of the pageant: