I was recently doing some vacation planing (one of my favorite daydreaming projects) and for a brief moment (about 2-3 minutes) I could not remember where we had gone in April. As part of this process of remembering I went to the blog and to my dismay I discovered I had not written about our April journies. The stupor of though over I now recall where we went but luckily, as with all places we visit, I took lots of notes. So without further ado I will start writing about our April visits. Which is important because we have some exciting travel coming up and I need to make sure I take care of the old before I start experiencing the new.

As someone committed to travel I have a big list of travel locations I want to see. I have been very blessed with the opportunity to visit many locations on my list. This said, I am a family man so I need to make sure I take into my family’s wants and wishes as well.

When we were thinking of a family trip for Spring Break it came to mind in talking to Denise that AJ had become a big Harry Potter fan. This year he finished off reading all of the Harry Potter books and he is anxious to learn anything he can about the world of Harry Potter. Earlier this year we went on a studio tour of Warner Brothers and there was a section dedicated to Harry Potter complete with the sorting hat and a flying broomstick and he loved it.

I think the Internet algorithms knew about AJ’s Potter fandom because I started to notice a lot of Internet ads for Universal Studios in Hollywood. The thing is living in Southern California we had been to Universal Studios in Hollywood many times and while a stay-cation is an affordable way to spend a vacation week, we had the time and money to something a little bit bigger.

We decided to go big and book a vacation for Universal Studios Florida. We knew going during Spring Break was going to be crazy for crowds and we knew if we stayed at certain on-site hotels we could get an included express pass (a pass that lets you skip the regular line). The thing was that the price for an on-site hotel for Spring Break was very expensive. Denise did her thing and used some on-line hotel comparisons and through Priceline, that were soo much cheaper than the on-site hotels that it didn’t make sense for us to stay on the Universal Studios property. In the end we spent our first night a few blocks from the property and the rest of the nights across the street from Universal Studios at the Double Tree Hotel. All the local hotels have free or low cost shuttles that go into Universal Studios, it is really a much cheaper option than staying on-site.

For the flight we chose Southwest, they are very cheap and convenient. They are considered a US budget carrier, but I have flown on all the other major US carriers and Southwest feels like the most luxury of them all. The A,B,C boarding system is very straight forward, you still get sodas and snacks on the flight, and two free checked in pieces of luggage. Travelers are getting sick and tired of being nickeled and dimed for everything. I can sometimes fly cheaper than other airlines but it has to be significantly cheaper or somewhere they don’t go before I pick something other than Southwest.

For tickets we kept watching and looking for different deals but none of them stood out to us but we had lots of preparation time. In November I spotted a special deal on the Universal Studios website that was 4 single day tickets, that didn’t expire until the day after our Spring Break, that included unlimited express pass and the water park. We scooped that deal up and it was great. At $1,200 for the three of us it was not cheap, but the extras helped us a lot. The lines were indeed long but with the express pass we skipped all of them and were able to get on all of the rides we wanted in 15 minutes. At Volcano Bay, the water park, they have this cool system called Tapu Tapu. It is a plastic wristband you wear and you go to the ride you want to go on and tap the wristband to the ride and it gives you a time. You are then free to do something else like the wave pool or lazy (or fast) river while your wristband waits in line for you. I liked it a lot. With the passes we had we went on every ride we wanted and had time to do a few more a second time.

AJ loved Hogsmeade and Diagon Alley at Universal Studios. He got to be picked for the wand choosing ceremony, we rode the Hogwarts Express, cast some spells, tried butter-beer, at a the Three Broomsticks, and went on some very thrilling rides. The level of detail is amazing. It is said that J.K. Rowling supervising the construction herself and she made everything detailed to her specification. Once you are in one of the wizard lands, it feels as though you stepped out of even the theme park world and went to this magical world of witches and wizards. I was very impressed.

We had some extra days on both sides of our vacation so we used Orlando as our base and visited many other destinations such as Medieval Times, St. Augustine, and Matanzas, and Cape Canaveral. I am hoping to post at least a quick post about each of those destinations as I get some more time. 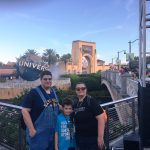 The Family Ready to take on Universal Studios Florida 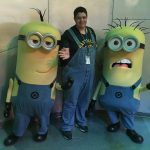 Hanging out with Gru’s minions. 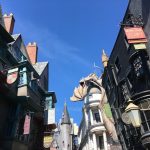 This dragon protects Diagon Alley and spits out real fire. 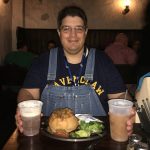 I preferred frozen butter-beer to regular butter-beer, but the surprise beverage was spiced pumpkin juice. 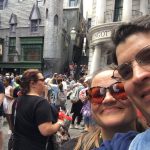 Denise and I hanging out at Gringott’s bank. 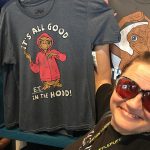 We had fun at the ET ride gift shop. 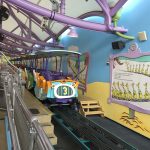 This train ride at Suess Island was very fun. 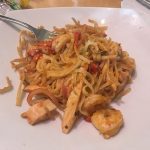 The food at the park was surprisingly good. Got this Pad Thai at Mythos which is a great sit down restaurant and was not too crazy with the prices. 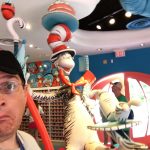 The Cat in the Hat ride is the craziest thing I have ever saw. I went through it but I am not sure I still know what happened. 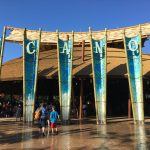 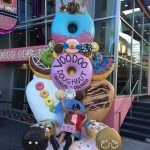 The magic at Voodoo Donut is they put you into a sugar comma. 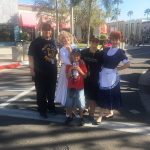 The family hanging out with Monroe and Ball. 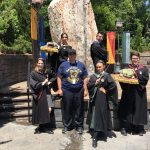 Singing with the Toad Chorale