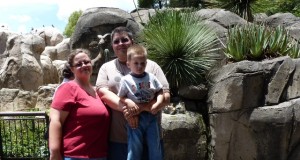 Denise and I are smiling. AJ is wondering if the goat is going to jump on us.

In Chapultepec Park I saw many food vendors but despite it’s name you I did not find one grasshopper. I don’t know what was up with that, I guess the Aztecs ate them all. In case your not aware Chapultepec comes from  the Nahuatl (ancient Aztec language) word meaning “place with the grasshopper.” Even so, Denise was very disappointed in not being able to dine on roasted 6 legged creatures.

Trying to cheer Denise up we headed to to the Chapultepec Zoo. Nope, no grasshoppers there either, but AJ did have a mission. As soon as we got through the gates of the zoo AJ declared he wanted to see two things: Pandas and Giraffes. Luckily, Chapultepec Zoo has both. 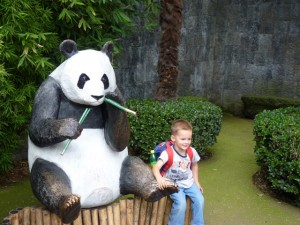 Hard to say if AJ enjoyed the fake panda more than the real one.

The zoo for us was a great choice for two reasons. First, zoos are very children tolerant. Basically, if you are ever in a city and need to find something to do for your children, find a zoo. Second, in Mexico City the zoo is free! Well entrance to the zoo is free. ANYTHING other than looking animals will cost you and I do mean ANYTHING. You want to play in the Butterfly Palace? It will cost you. You want to check out the cool snake temple? It will cost you.  Need to go to the bathroom? It will cost you. You getting hungry and feeling the need for some McNuggets? It will cost you. Oh well, but then again, what made you think they were giving away free food in Mexico?!  Actually, it isn’t that bad, although I am guessing $22 pesos ($2 dollars US) for an ice cream cone and 4 McNuggets is expensive to the average Mexican, it seemed rather normal priced to me. Also, paying  5 pesos (.40cents US) for a decently clean restroom with toilet paper also seemed really reasonable.

Overall, we enjoyed Chapultepec park a lot. The zoo was very well laid out and it was fun to see all the animals. After going to the zoo we strolled through Chapultepec Park and saw all the vendors. It is hard to describe what it is like running the gauntlet of people trying to sell you everything from hot dogs, to fake poop, or  a picture with your favorite Mexican cartoon character (apparently Barney is big in Mexico City). I did take this little video in attempt to get the atmosphere:

After walking through the lanes of Chapultepec Park we stopped by the Ninos Heroes (Boy Heros) Monument. This monument honors the boys that were slaughtered in the Mexican American War. In this particular bloody incident of the war, the American Marines took over the Mexican capital of Mexico City. The main army fled, but the cadets in Chapultepec Castle (back then it was a military officers school) stayed and decided to defend the capital. They were no match for the American army and basically got slaughtered. According to legend at the end the last cadet rather than surrender wrapped himself in the Mexican flag and jumped off the Chapultepec castle tower. Soon after this event General Santana was captured and half of Mexico (what is now California, Utah, Colorado, and Texas) was given up in ransom.

After seeing the monument we found a little Argentine restaurant called El Kioskito. No grasshopers there either. Denise was again disappointed but she quickly got over it when they gave her enchilladas. There were all sorts of pictures on the wall. We would have probably had been more impressed if we watched more Mexican TV, but we soon learned who the owner of the restaurant was by looking at the pictures, there wasn’t one picture without him in it (we should of asked the waiter for his name). Seeing a prime opportunity for meat, I ordered a round of steak tacos. AJ got a kids meal which was a big plate of spanish rice. It was a nice meal and it had good atmosphere. The best part was with tip it only cost us about $20 dollars.
(click on a picture to enlarge)