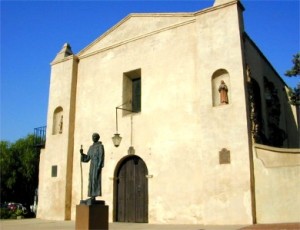 The San Gabriel Mission is the 4th of the missions built in 1771 and is the closest to Los Angeles.
Known as the “Pride of th Missions” it is a fully working mission with an active parish. The mission is open all days (except major holidays) to visitors 9am-5pm and will cost you $5 to visit.
While visiting the mission you will see not one, but two cemeteries, a garden, the chapel, and various ruins of old work stations.
The two main industries for the San Gabriel in it’s heyday were wine and candle wax.
The mission has had several disasters over the years but surprisingly has not suffered much damage. The worst damage has been that of the bell tower, which now has been moved away from the main chapel.
When we were there there was a group of 4th graders from a local school visiting. AJ wanted to do anything they did. His favorite part was when he got to ring the bell they had.
(click on the images to expand them)