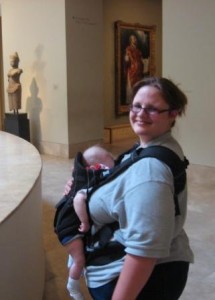 John finished the winter quarter on Thursday the 20th of March. Thankfully we know he passed both classes, with a B and a B+. Not enough to get him on the honor roll, but enough to get him out of there, which is the important part! John had Sunday through Thursday off of work, and so we endeavored to enjoy a “”from home”” spring break.

On Saturday we left after John’s work to visit my parents for Easter. A good time was had by all!
We left Monday morning and visited the Norton Simon Museum in Pasadena. Visiting a museum with a four month old infant is a unique experiance. We certainly didn’t go see the galleries straight though. However, with breaks for diaper changes and eating and especially with the aid of the Snugglie we were able to see most of the museum. Also, since we didn’t have as much time in the 19th and 20th century galleries as we would have liked, we now have a reason for coming back! I know that in the picture AJ looks like he’s facing in, possibly suffocating, but he prefers this position, occasionally turning his head to the side.

After the museum, we joined the TLJs for dinner at The Counter in Santa Monica. YUM!!

What a handsome group of guys! 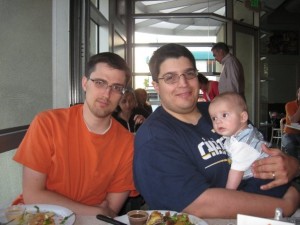 Tuesday we relaxed and did nothing more than see a movie. (College Road Trip) It was goofy and predictable, but fun, and Donny Osmond was very funny! For those with out our “”sophisticated”” taste in movies, feel free to wait for video. 🙂 On Wendesday we drove out to Yorba Linda for a visit to the Richard Nixon Library and Musuem. Once again our visit was not quite as long as it would have been with out AJ, but without AJ I wouldn’t have taken the time to admire the gardens (while he took a nap). This slightly blurry picture is of AJ and me in the kitchen of the home in which Richard Nixon was born in (literally born in, in his mother’s bedroom) and where he lived until he was 9. Besides the exhibits about Nixon’s life, and the boyhood home, the museum also includes an actual Marine One that Nixon (and other Presidents) used.

Thursday was our last day, and our fullest. I’ll blog about that on another day. ” 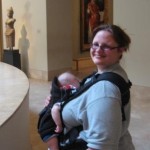 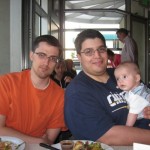