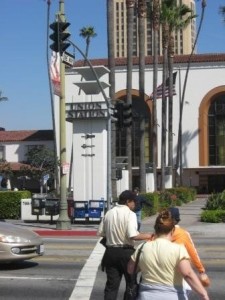 “For our last day of Spring Break we went in Los Angeles on the Metrolink Train. Two round trip tickets for the three of us were $38. This is probably slightly more than the gas for the Metro, but less than for the Sportage, and a bargain when you consider that we didn’t have the aggravation of driving in LA traffic or the cost of parking.

AJ enjoyed the train, and fell asleep for the second half of the trip. We arrived at the beautiful Union Station about an hour and a half later.
As you can see from the above picture, we brought the big stroller. It was wonderful! Yea for a stroller AJ will sleep in. 🙂 As I’m sure most of you know, a well rested child=a happy child=happy parents! Almost exactly across the street from Union Street is Oliveras Street, where strangely enough is a wonderful museum dedicated to the city’s chinese heritage, The Chinese American Musuem. Unfortuanatly the CAMLA didn’t allow pictures of any kind. However, right next door was an old fire station, with displays set up.
From there it was a couple blocks walk to the “”new”” Chinatown, a planned community built in the 1930’s when the original Chinatown was destroyed to make room for Union Station. While somewhat touristy, LA’s Chinatown is much less touristy than Oliveras Street, and is still a place where people actually live, not to mention eat, we enjoyed lunch and desert!
Once we had browsed and munched our way through Chinatown we were one stop down on the Metro Gold line and rode the Gold line back to Union Station. From there we made our way back across the street to Oliveras Street, where things were busier than they had been earlier in the morning. We browsed some more, and enjoyed visiting the Avila Adobe, LA’s oldest existing home.

After all that excitement it was time to go home, so back to Union Station. Overall it was a fun, exciting day, and we learned that hauling a twenty pound stroller in and out of car, and in and out of a train is well worth the effort! Next week I’ll do a more detailed AJ update, unless something more exciting happens between now and then. Ta Ta for Now.” 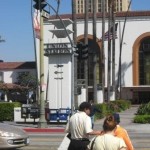