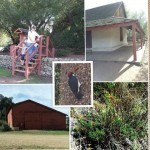 Lots of things to see on our 6 mile hike.

California is a very diverse place. If you want to be connected, you can be connected. If you want to disconnect you can do that too. Yesterday (2/15/14), was one of those days that I really felt I needed to disconnect. It has been awhile, but I remember back in my construction days getting out and hiking along the trails of the Santa Rosa Plateau Ecological Preserve. 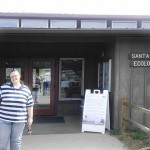 Denise and AJ at the preserve museum.

Found on the outskirts of Murrieta, CA you get to the preserve by traveling on the 15 to Clinton Keith Rd. Travel up the mountain past Bear Creek and all the fancy houses and you will eventually end up at the preserve. If the visitor center is not open you can place your fees ($3 for adults, $2 for children, $1 for dogs or horses) in one of the metal posts. 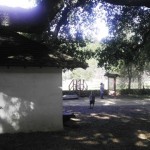 You can see in the background a stile step. These stairs allow people through but keep out cows without the need for a gate.

For our hike we decided to go to the historic adobes. To understand the adobes you have to understand the ranch system of California. Interesting fact about the original rancho was that it original land grant was 48,000 acres. After California became part of the Union the ownership of the Rancho came into question.

In 1885 there was a challenge to the ownership and it was sold for $1,000 dollars to Augustin Machado. The price included $500 worth of cattle. The adobes were believed to be built that year for the cowboys. The title was not settled until 1872. This caused problems, which compounded with other problems broke down the land grant until in 1904 Walter Vail bought the Santa Rosa Rancho in 1904. The majority of the land was used to found what is today known as Murrieta and Temecula. The preserve part of the Rancho was considered a outer limbo like area and the adobe was a sort of makeshift jail for drunken cowboys. Several developers later in 1984 a conservancy group bought 3,300 acres of land which now incorporates the preserve.

The land today is very beautiful and serene. Which after a long week of work is what I wanted. The land is known for some vernal pools, which fill up after heavy rainfalls. We hiked along trails and enjoyed a nice day imagining what it must of been like being a cowboys roaming the prairies (except we didn’t have any horses).