So we had just finished visiting the Pacific Museum of Asian Art (more on that in a later post) and we still had a bit of time and wanted to know what to do. So we decided to start walking. Pasadena is a quaint city, but unless you know what your looking for it doesn’t really help to wonder around. We tried going to the visitor’s center, but we found out that it no longer existed. Then we went to a Hilton hotel and asked the concierge what to do, but couldn’t afford any of his suggestions. So we walked some more, and that is when we found the Pasadena Museum of California Art.
[rss-cut]
As the name denotes The Pasadena Museum of California Art is a modern museum dedicated to a California theme, but like most modern museums I have ever been to this is a very “loosely” interpreted theme.  In all modern museums you always seem to find both strange: 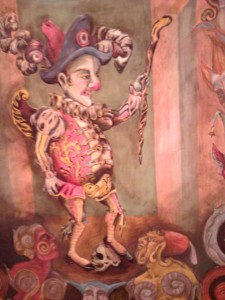 Hate to see this guy in a dark alley. 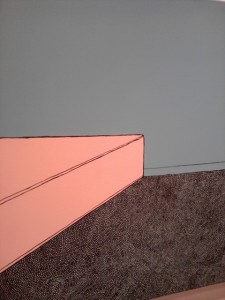 Can you guess what this is supposed to be?

One thing that was different at this museum was that all the exhibits were for sale. Unfortunately, the only price we could afford was the $7 dollar admission. This didn’t however stop us find each selecting a favorite of our own… 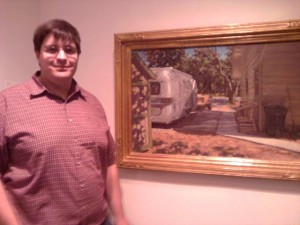 I chose this picture because lately I have been in a traveling mood. The idea that I could just hop inside this airstream and just get away was very appealing to me. 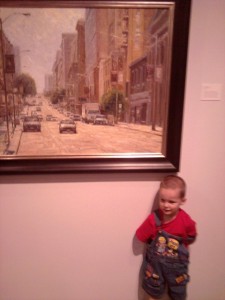 This was AJ’s favorite. He didn’t tell me much about it, but I am guessing he liked the cars. 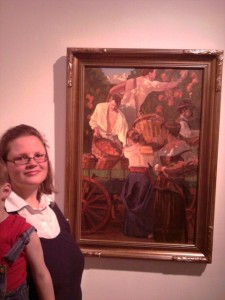 Denise’s favorite was in my opinion probably one of the most Californian paintings there. The idyllic scene of people harvesting oranges was very pleasant (move your mouse over it for more detail). It also reminded me of the 1930’s paintings that we saw at the Arizona state capitol in Phoenix.

Anyhow, if you have a little bit of time I encourage you to check it out. You might just find a favorite of your own.