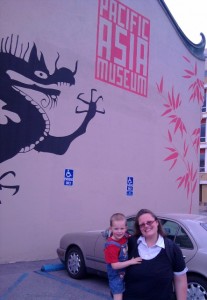 Groupon has been a good fit for us as a family (and no I don’t get paid to say that). The Pacific Asia Museum 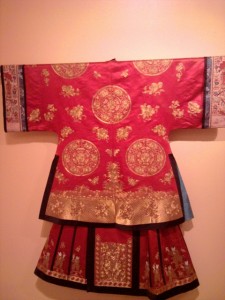 Got to love this embroidery work.

in Pasadena is a museum I have heard about before, but before we got the Groupon deal we never went. So with groupon in tow we went on a late Saturday morning. Ironically, however it just happened to be the same Saturday the museum was offering free admission(every 4th Sat.). Oh well, it was the only Saturday we could have possibly gone. 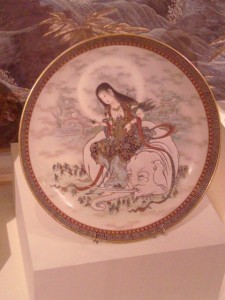 This was my favorite plate, it was from Japan.

The Pacific Asia Museum as one would guess by the title is dedicated to those arts originating from the Pacific. I have to say though looking at the paintings and roofing tiles of the buildings I was thinking mostly about China and Japan, but the Pacific is a big ocean and so there are many more cultures to be found in that building. 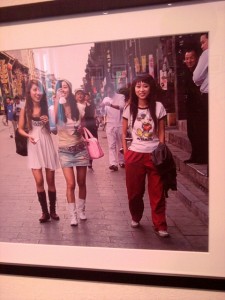 The Pacific Asia Museum is interesting in that many of it’s paintings are made by people from other countries observing countries that are not native to themselves. Case in point is the museum’s founder Grace Nicholson who first started the museum in 1924 (back then it was called the Pasadena Art Museum) to house her contemporary art collection. Although she collected lots of art, it was more than apparent that her affinities leaned to the far east and by 1971 the present name was more fitting.

Strolling through the museum you will find lots of diversity. From paintings, to sculpture, to pictures, and three mischievious coi fish there is plenty of things to entertain you at the museum. A smaller musuem, it can be seen by most people in less than a half a day.