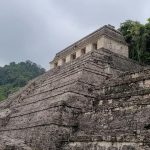 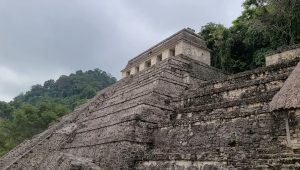 The pyramids of Palenque have been known for a long time. When the Spanish came to the area in 1520, the city was still inhabited but Palenque was mostly an abandoned city. The archeological evidence says most of the city was abandoned in the 850s.

Palenque was a name given to the area by the Spanish but the city’s real name is Lakamha, which means “Big Water,” which makes sense if you visit the site because there is water all over the place. There are three rivers that cross the site and plenty of cenotes (natural wells) that surround the area.

There is a legend that says that the city was founded in the year 2325 BC by a king known as Muwaan Mat, there is however know evidence to back up that legend. The archeological evidence suggests  the city was probably established in the year 252 BC by a King named Casper (also known as The Rabbit). The city was a perfect trading hub and slowly prospered.

In the year 615 AD King Pakal was named king. In the year 610 the City State of Kaan attacked Palenque and killed Pakal’s father. His mother, Lady Sak Kʼukʼ, ruled until Pakal was 12 years old, which was considered the age of maturity in the Mayan world. Archeological evidence suggests that King Pakal was Palenque’s greatest ruler. Almost all the buildings you see today come from his rule.

King Pakal was determined to not have his kingdom ever fall again. He moved quickly to avenge his father’s death. He built up the army and went from being a servant city to taking over the entire region. His reign lasted 68 yrs until he died when he was 80 years old, he was the longest known monarch of the Mayan empires.

In the 800s the entire Mayan civilization went through an unknown stress. It is unknown what exactly happened. There is plenty of archeological evidence by way of stone writing but they all suddenly stop around the 8th century. Some speculate it was deforestation, others a plaque, but by the time the Spanish came the great Mayan cities, including Palenque were in great disrepair.

Palenque was largely ignored by the Spanish. The area was considered too dense for colonization and so it was ignored except for small Spanish treasure hunting expedition in 1773 where they smashed a lot of walls but found found nothing of interest. In 1832 an archeologicalist named Jean Fredrick Waldeck was sent from the British Honduras. He camped inside some of the pyramids for two years and copied a bunch of inscriptions. He was trying to link the Mayans with Egypt and the lost tribes of Israel.

Besides some sculptures and many inscriptions, no archeological expedition ever found anything significant in Palenque until in 1948 a Mexican  archeologicalist named Alberto Ruz Lhuillier noticed four notches while cleaning at the top of a pyramid dedicated to King Pakal. 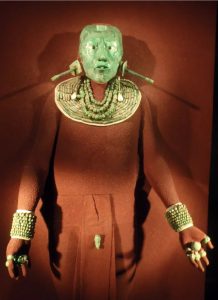 These notches were removed and it revealed a staircase covered in rubble. The rubble took four year to remove and it opened up a tunnel that went down deep into the pyramid. At the very bottom of the pyramid, the archeologicalist found a 7 ton tombstone, which they believe was placed first and the pyramid was built around it.

Lifting the stone they found the remains of King Pakal, covered in an elaborate jade outfit with a very detailed jade mask. Today King Pakal rests in Mexico City at the The National Museum of Anthropology of Mexico in a special display that shows both King Pakal and his jade outfit.