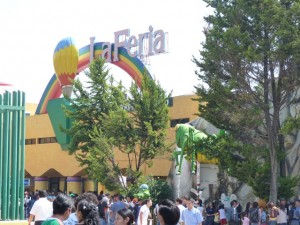 La Feria was very popular when we were there.

As I said in my last post of Chapultepec Zoo, Chapultepec Park is huge. In the second section of the park is the amusement zone. In the amusement zone there is a children’s museum called El Museo Del Papalote (Kite Museum), the technology museum, a ecological park called Planeta Azul (Blue Planet), and La Feria (the Fair).
We only had time for one venue so we went for the big one: La Feria. La Feria is a amusement park that was started in the 60s when it’s signature ride called La Montana Rusa (the Russian Mountain), a roller coaster, was first constructed on the site. 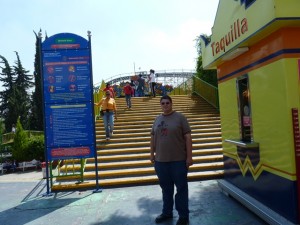 The roller coaster is called La Montana Rusa (Russian Mountain) but it was decorated in a Aztec motiff which was a bit confusing.

Since then many things have been added to the park. All together there are about 35 rides that range from little kiddie rides, to motion simulators (the one with Elvira speaking Spanish was hilarious), to roller coasters that will loop you 360 degrees. AJ really enjoyed himself. I don’t know how many ways you can go in a circle, but AJ sure gave it a go.
The park also has a very entertaining dolphin show.

When we went to the show it was kind of amusing because there was this family in front of us that very obviously had money. 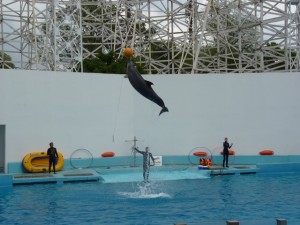 The dolphins were Chivas fans (the trainer was from Guadalajara).

First of all there were two nanny’s in the group. We knew they were nanny’s because one had a pink uniform and the other a blue one. Then the two women in the group totally stuck out. Which was funny to me because we always standout as American tourists, but these two women stood out in a whole different level. It wasn’t any one thing, but with the manicured fingers, hair, and gucci purses I knew they had money. People in the city usually dress very well to begin with (especially when they are going out), but this was totally different. 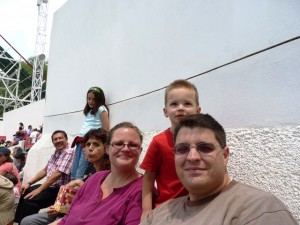 We had a fun time at the dolphin show.

Besides that one family I would definitely say that this amusement park was the “working man’s” park of Mexico City. There is actually a Six Flags Park in Mexico City which at $35 US dollars a person is the more expensive park. In contrast an all inclusive pass for La Feria is only $15 US dollars. Food prices inside the park are not that great and highly elevated. Just outside the gate there are many food stalls that are way cheaper and much tastier. The only thing is the park does not permit food into the park or reentry so we just bought a small snack in the park and at outside at the stalls for dinner. 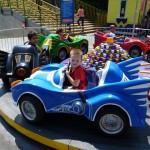 Batman has nothing on AJ. 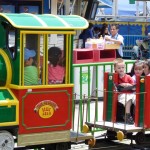 AJ did a lot of rides that went in circles. 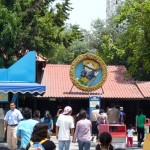 Denise and AJ didn't understand much at the crooked house.