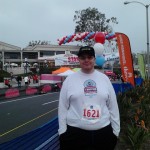 You can tell by this picture I was very nervous.

More than five years ago I did my first race; it was the Agoura Hills 5K (3.1 miles) race. I didn’t know anything about racing back then. I weighed 305, saw some cheesy sports movie and all the sudden I thought I was Ryan Hall or something. After about 41 minutes (of all downhill running) I found out I wasn’t. I barely made it over that finish line, but yet, I did!

Fast forward to 2007 and I ran the Disneyland Half Marathon. I don’t even remember the last 3 miles of that race. All I really remember is waking up in a medic’s tent yelling at a doctor telling him there is no way he was going to put an IV in my arm until someone handed me a finisher’s medal.  I didn’t remember the last three miles, but I knew that I had crossed the finish line. I couldn’t walk for a week after that race. My feet were shredded, I didn’t know if I would ever try another race again, but, I did.

I doubt anyone remembers, but back in 2010 I did a series of blogs that I called “Fat Man Running.” It is just as well that no one remembers them because I totally failed; I only ran three weeks and then I stopped. Mostly, it was too embarrassing having to report continual weight gain. Then, on a random Monday (9/20/11), I started walking again. It was slow, but for some strange reason, I kept it up. I don’t know why this time was different. I didn’t blog about it. I didn’t plan anything. I just walked. It wasn’t until 4 weeks of walking that I decided that I should do something more, and that was when the idea of the half marathon hit me. (Denise’s note: actually that’s when he came to his wife and said that he needed a race in about January, and I came up with the Irvine Half.  Why yes, I am taking credit.)

At first I was scared.  Although I finished the only half marathon I entered, it wasn’t a very pleasant idea to know that I could potentially faint again, or that I might shred my feet and hobble myself again. What if I couldn’t find the time to train and didn’t even want to show up to the race (thus wasting the $60 entrance fee)? What if I got out on the track and they told me that I was too big and then I wasted $60 dollars plus the gas to get to Irvine?? The questions just got bigger and bigger. The rational me screamed “what the heck are you thinking?!!” But there I was, 4 days a week training for a half marathon. 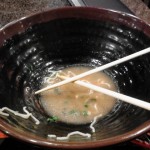 We carbo loaded right before the race on ramen.

They say races are mind over matter, but I think this was a case of matter over mind. I think my body wanted to do this race, because my head certainly didn’t. I can’t explain it very well, other than it is like all the cells in my body (except for my brain) have gotten a group consciousness and they are now demanding better working conditions. 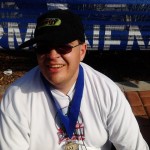 I wore this medal all day.

Thankfully for me, this half marathon was much better than the last half marathon. Not only did I finish it, but I smashed my PB (Personal Best) by more than 20 mins. I was very tired after the race, but I do remember all of it, and I didn’t even come close to fainting.  I don’t have many pictures of the race, but lest you think I wasn’t out there you can check out the Official Photos (looking at them I think they make for great black mail).

I think this is going to turn out to be an interesting road. My body isn’t ready to be quiet yet. In fact, a couple of days after finishing this race, I signed up for another half marathon race in June. There is also a distinct possibility for something bigger in Oct. I would tell you what that was, but there are currently two different options and I will not know for sure which option I will take until February. It should be a very interesting year, where it ends up is anyone’s guess.