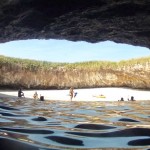 Maybe you have dreamt/heard of a mythical beach. A beach with white sands and clear water, a hidden beach, a beach in a little cove all to yourself. Does such a beach exist? The answer is maybe, but if you have found it there is high probability that someone else has found it too.

As the name denotes I am going to talk about the Islas Marietas (Marieta Islands), which is a set of small islands about 10 miles off the coast of Puerto Vallarta. Every travel brochure I saw in Puerto Vallarta talked about “the best kept secret” of the Islas Marietas. Can something be called a “best kept secret” when you go into a grocery store and the guy at the checkout counter is trying to sell you a tour to the location?!

Needless, to say there is a lot of myth vs. reality going on when it comes to the Islas Marietas. I am not going to claim there is to know everything about them because I don’t but I will say that I had quite an adventure visiting the island. I had seen a few ads about the island so I was interested in seeing what the reality was. 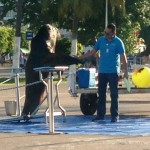 I found it kind of funny that after each picture the sea lion got he gave his trainer a high five. 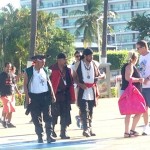 Watch out, all pirates want money. 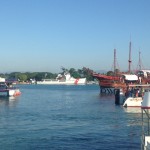 There are lots of different ways to get to Islas Marietas. I was curious about the US Coast Guard boat being in Mexican waters.

My day at the Islas Marietas actually started the day before at the marina shopping for tour packages. If you mention the fact that you are interested in going to the island there are no shortage of people ready to sell you tours. On the high end you have big tour companies like Vallarta Adventures which will sell you a tour between $100-130 on the low end you can hire a panga boat to get you there for about $20. I happened to make some friends while I was in Puerto Vallarta and they pointed me out to a guy that they said would make me a good deal. In the end my expenses broke down as follows, denoted in pesos: 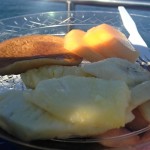 My breakfast consisted of hot cakes, yogurt, fruit, and granola.

I have to say that I doubt most people will get the same price I did. I spoke to a few of my fellow passengers, many of whom were Mexicans, and they paid on average 1,000 pesos for their ticket. Apparently, there is a gringo (aka foreigner) price, a Mexican price, and then a Puerto Vallartan price. My guess is there is also a family price, but I don’t have any family members that I know of in the Mexican marines. If you noticed I posted the price in pesos. My experience in Puerto Vallarta was that everyone there would except payment in dollars but it was kind of a double tax. First, the exchange rate at the store was 15 to 1, while the real exchange rate at the bank was 16.5. Second, paying in dollars always got me the gringo tax which immediately made everything cost 20% more. My point, learn to speak Spanish (even if you don’t know how try, the locals think it is cute) and pay in pesos for the best prices.

So, for my 1010 pesos I got a few things more than just a boat ride out to the Islas Marietas. I opted for a medium sized catamaran. My tour included transportation out to the island with guides that pointed out things along the way, a light breakfast (pancakes, fruit, yogurt, and juice), all the beverages I wanted (it even included alcohol but I don’t drink), a lunch voucher, some snorkeling time, some kayaking time, some paddle boarding time, a trip around the islands, some time on the “hidden beach”, and lunch. 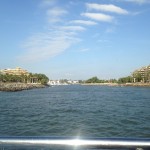 A view towards the opening of Nuevo Vallarta. 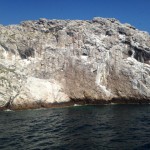 This part of the island used to be use as target practice.

Circling the islands we saw some cave formations and a wall that was apparently bombed by the Mexican Navy. As much as I would have loved to go take a hike on the island we were told that there were very limited areas where people were allowed to make landfall. Apparently you used to be able to hike on the island, but in the 90s some hikers started a fire and it burned a lot of the island. Ever since the SEMARNAT (Mexican Conservancy) has taken over control of the island and limits what can be done there. The island today is home to thousands of birds and a special agave cactus that only grows on the island.

Luckily, for me one of the places you are allowed to go to is the hidden beach. The locals call it “lovers beach.” It make be secluded but I don’t know if I would classify it as hidden or a place for lovers. To get to the beach we first transferred from the catamaran to a panga to get to the site where the hidden beach cave is. To get to the cave you must swim about 200 meters. That was kind of easy. The hard part was the 100 meters through the cave. The hidden beach was created by a volcano crater that was partially carved out by the waves. Slowly carving a hole from the ocean up, the effect has been a cave that you must swim through to get to the beach. The natural tendency of the waves is to push everything away from the beach. This includes people who are trying to get to the beach. To make it a bit harder they make you where a life preserver, which is probably a good idea, but I found it hampered my stroke technique. The guides said everyone could go to the island but I don’t know if that was a good idea. I saw two kids that were not good swimmers not do so well. I thought they were going to drown but luckily three guides helped them. 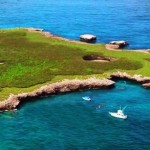 This aerial shot gives a good perspective of how far you swim into the island. 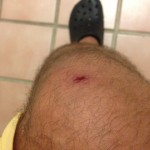 I got a pretty good gash on my knee courtesy of the waves at the Islas Marietas. 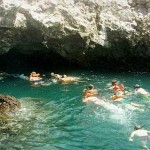 The opening to the tunnel is small on high tide days. 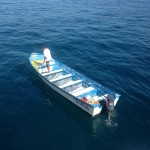 Big boats are not allowed to be too close to the cave so you take a smaller boat known as a Pechanga.

The beach was beautiful, but there are some things you know to be aware. The pictures kind of show this myth of an excluded place. The reality is if the surf is calm enough for you to make landfall, there will likely be people on the beach with you. You are not allowed to bring anything with you except a camera and a life preserver. On the way back I got caught with a wave that pushed me up against a rock and I got a pretty good gash on my knee. Nothing major, but it did hurt (I like to think I am a blood brother with the islands now). 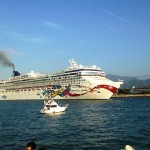 I couldn’t believe that the NCL Jewel was leaving at 5PM. Talk about leaving the party early!

Coming back there was a lot of music going on but I was kind of tired so I just chilled on the top deck. For lunch they gave us a hamburger and camarones embarazados (pregnant shrimp). The literal translation of pregnant shrimp sounds weird, but it really just means shrimp on a stick that has been cooked with fire (it is really good). On the way back we saw the NCL Jewel of the Sea (a big cruise ship) leave port. The catamaran was tiny in comparison to that ship.

Overall the day was great. If you get the chance to go and you are a good swimmer I would highly recommend it. 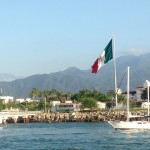 You know your at a Mexican port if there is a big flag. 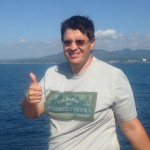 Being on a boat gives you a different outlook of the coastline.