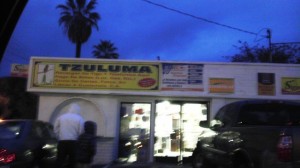 Riverside is a very interesting place to explore. We live in the neighborhood known as Arlington. It isn’t a very rich part of town. Normally a poor neighborhood means that it is a bad part of town, but that is not the case with Arlington. Mostly it means that Arlington is a very ethnically diverse part of the city. When I walk home everyday I can often smell lots of interesting smells and wonder what my neighbors are cooking. What is cooking beyond those doors remains a mystery, but there is one note of condolence in the action. There are a lot of ethnic specific stores where I live.

Denise and I had passed by Tzuluma many times. I have always wanted to check it out. When we were in Guatemala I didn’t really see much diversity in the food. If I were to describe the food of Guatemala based on what I saw when I was there I would have to say fried chicken and pizza. Seemed like they were selling those two things on every corner when we were there. So it was with a lot of curiosity that I entered Tzuluma on Magnolia Avenue, trying to see if I could find anything that resembled a regular Guatemala staple. This is what I found: 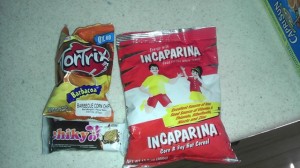 There were lots of things, but I found the snack food the most interesting. There were lots of different chips and cookies available, but I settled on the Tortix chips and the Chiky cookies. As it turns out they were not that exotic. The Tortrix chips were basically Fritos and the Chiky cookies were just vanilla wafer cookies covered with chocolate on the bottom. Good but nothing that remarkable.
Surprisingly, it was the “cereal” Incaprina that was very different. Notice I used quotation marks. The package was in english and when I thought about the prospect of hot cereal made out of corn and soy I was kind of thinking of cream of wheat or maybe grits, but that was not the case. I followed the instructions exactly like it said on the back of the package. It was really simple 4 tablespoons of Incaparina, 4 tablespoons of sugar, 1 teaspoon vanilla, a little bit of cinnamon to taste, and 1 liter of water (luckily I have a measuring cup that can measure that). I boiled it like it said for 10 minutes, but it didn’t get thick. I was wondering if I did something wrong but after watching a few videos I found out I did it exactly right. The consistency of the drink was what I would call atole (a Mexican cornmeal based drink). It was sweet like hot chocolate, but I found it was a very energetic drink. At first I thought the energy was coming from the sugar, but reading the back of the package I found out that Incaparina is very nutrient dense. It has a lot of Iron (which is good because I am low on that these days), Protein, and Vitamin D. I am not lactose intolerant, but I could see how this would be a great milk substitute for those that were. As it is I think I might start using this as a post run recovery drink.

In other news all goes well. It has been rather busy. Lots to write about, but not much time to write about them :(. I am hoping to have some more time to write. I like to write, but it seems to become the last on a ever increasing list of things to do.