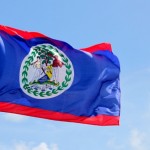 As a parliamentary constitutional monarchy Belize was renamed in 1981 from the British Honduras to Belize, but still remains tied to the United Kingdom. The official head of state is Queen Elizabeth II, but the real power rests in the Governor-General who is elected out of Belmopan, the capital. 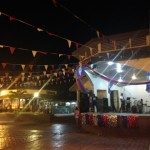 Heard a lot of good Belizean music at the park plaza. 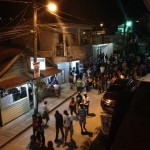 To celebrate their independence parties span between September 10th and September 21st. The day where everyone really celebrates is September 21st. We noticed the celebrations starting at about 8pm with people starting to fill in the plaza. San Ignacio is usually a quiet town, with almost no traffic, but on the night of the 20th it got really crowded. From the hotel balcony I could see lots of people walking between the two plazas. 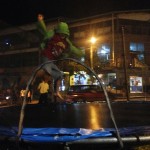 At the park plaza they had bands and jumpers set up for the kids. At the police plaza they had different community groups doing different skits. Most of them ended with the actors stating “and now I am going to get tested for HIV for a healthy Belize.” (apparently the rates are high in Belize).

At about 11:30 PM a bunch of runners came into town and had torches. It was kind of like the Olympics in where there was a big torch at the police station and they all used their little torches to light the big torch. I don’t know what that was all about, but the people were really excited about it. 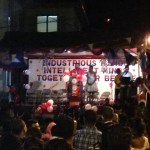 The mayor with Ms. San Ignacio. 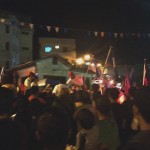 The torch runners going through the crowd to the police station. 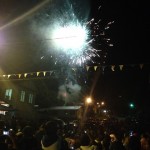 At 12:00 AM with the help of the Mayor and Ms. San Ignacio leading a countdown fireworks were launched. The fireworks were really big and really close. There were several soldiers in the plaza, which was good because the crowd kept wanting to get closer to the fireworks, but if we had gotten any closer they would have been exploding on to our heads. 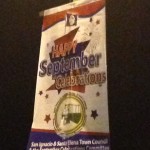 Overall, the festivities were really fun. For as much alcohol that was flowing the people were very calm. Everyone was for the most part very orderly and very happy to share with us their independence day celebrations.