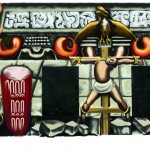 On Saturday our Ward (church group) was going to Olivera St. for the day. Denise and I have been to Olivera St. at least a dozen of times. It happens to be my second favorite place in the world to get a churro and with my hispanic roots it is a good place for me to rekindle some of those roots without having to make a drive to the border .That said we kind of feel like we know the place, but as we discovered yesterday we really don’t. 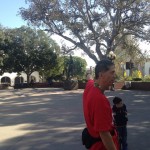 While we were at Olivera St. we decided to take a walking tour and during the tour we visited two places that we had never seen before. One of those was the America Tropical Interpretative Center. 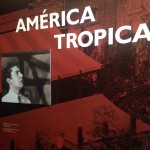 Siqueros was definitely a rebel rouser wherever he roamed.

The story of America Tropical starts with the famous artist David Alfaro Siqueiros. To understand the painting you need to know a little bit about Siqueiros’ history. Siqueros history starts as a muralist for the Mexican Revolutionist government in the 20’s under Alvaro Obregon. A firebrand painter, Siqueiros painted murals depicting the Mexican worker fighting for their rights. It was no surprise that he eventually joined the Mexican Communist Party. For this he was jailed in the 30’s and exiled from Mexico.

He eventually ended up in Los Angeles, California in 1932. Which just happened to be the year of the Olympics. At that time Olivera St. had fallen on hard times. A movement was going to restore Olivera St. as a historical district. Some business owner got the idea to paint this mural by this famous painter. The idea was to paint a lush tropical garden scene with birds and plants. With all the people coming for the Olympics it would work out great. 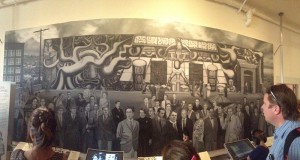 The first vision of America Tropical was a bit harsh for America.

What they got was America Tropical (“La América Tropical”). A harsh depiction of an Imperialist eagle overseeing the destruction of the Americas. To the right were Peruvian and Mexican revolutionaries trying to shoot the eagle down in vain. The business owners were shocked. Almost immediately the part with the revolutionaries was white washed. In 1938 many Mexicans were forcefully deported under the Mexican Repatriation Act of 1938, Siqueiros was one of the first to go. Siqueiros would go back to Mexico and continue painting famous murals in the Pallace of the Fine Arts (Palacio de las Bellas Artes) and the National University of Mexico (UNAM). As soon as his was deported Olivera St. white washed the rest of the mural.

The mural was then forgotten for many years until in the 1960’s some paint started to chip from the walls and someone rediscovered the mural. The answer apparently was to cover it up with more paint (they were not as radical in the 60’s as we thought). In 1982 records show that the mural was again rediscovered, but they decided to cover it up with plywood. Again forgotten. 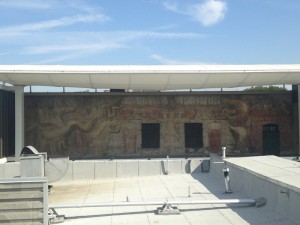 This is a photoshop version of how I imagine the colors might have looked (click to enlarge).

And there it sat under paint and plywood until in 2012 The Getty Conservation group made a million dollar (actually 1.2 million dollars) offer Olivera St. could not refuse. After some very hard patient work, a mural forgotten for over 80 years is now uncovered once again. The colors are a bit faded but the mural can be seen.Which to me is funny because I have been to Olivera St. numerous times since 2012 and I never heard of the painting or it’s story until I took a free walking tour (thank you Las Angelitas del Pueblo). 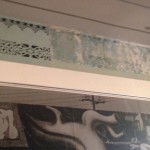 Not only did the the Getty restore the mural, but they helped restore the Sepulveda house.

The interpretive center is a wonderful resource to understanding the mural. In addition to being a viewing area for the mural, you can learn about Siqueros and how the mural was restored. The best part about it is it is all FREE! Just walk in and learn for yourself. And when your done with that, you can visit the Sepulveda House (another place I learned about), which deserves it’s own post later.