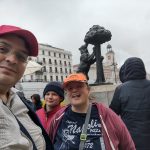 When we got to Madrid it was the morning and our room was not ready. Sorry family no sleep yet for you. I decided the best thing we could do was to go on a walking tour. The hostal we were staying at was very nice to let us drop off our bags and off we went. 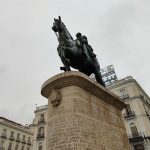 Carlos III is known as the “mayor” of Madrid for all the improvements he made to Madrid. 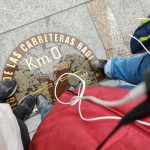 This point in Puerta Del Sol marks the 0 point for all roads in Spain.

For our walking tour we downloaded the Rick Steeves Audio tours. These self-guided audio tours were great for our family. I love learning about new places but an audio guide is totally at your own pace. If you want to stop and explore some place more you just stop the player. Plus, I have to say that the Rick Steeves Audio tour was just the right amount of history and humor for our family. Not being in a big tour group I felt like we got to go to some places that the normal tour group could probably go without causing a ruckus.

The tour started us in Puerta Del Sol, which is kind of like the times square of Spain. Puerta Del Sol is also literally the heart of Spain. There is a stone that marks the 0 point for all the roads in Spain. A plaza is just a Spanish word for square and in this one there was a statue of a bear and a berry tree, which is apparently the symbol of Spain. Lots of people were waiting in line to get their picture with this statue so we did too. There was also a statue of Carlos III, who is known as the “mayor” of Madrid due to all the improvements he made when he was king. Whenever a politician in Madrid does something wrong everyone points to the statue and says “Why can’t you be more like Carlos III?” 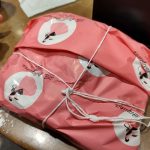 La Mallorquina is a well established bakery in Madrid. 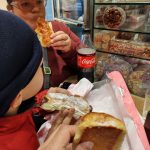 Napolitanas are flaky bread treats that come with both sweet and savory fillings.

Food on the plane was OK, but we were looking for a nice snack in Spain. For our first snack in Madrid we decided to go to a place called La Mallorquina, which is a well established pastry shop. At the pastry shop we ordered napolitanas which are flaky breads which have different fillings inside. We had some savory cheese and ham ones and some nutella filled napolitanas. Both were great. What I thought was funny was that they wrapped them up for you in a little package with string. It was almost like a present.

Leaving Puerta Del Sol we went to Plaza Mayor which is the main plaza. Having been used to visiting many plazas in Mexico I was surprised that in this plaza there was no palace and no church. It was just a plaza completely surrounded by buildings that were mostly restaurants. It did not have a palace but it did have a king. Which was strange for me. The plaza is completely blocked off to traffic, but this car started driving through the middle of the plaza, and then there were lots of horses. Then we saw a limo with the royal flag on it and in the limo was the king of Spain. It was kind of random, but I guess if your the king of Spain you go where you want. 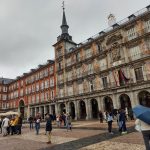 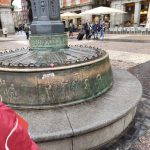 At this spot in Plaza Mayor they used to torture and kill the “infidels” during the inquisition. 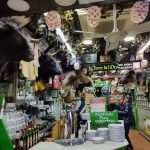 This quirky bar is dedicated to bullfighting.

After the royal entourage left the plaza (we would see them again later) and went to El Mercado de San Miguel. We had already gotten a snack so we were not that hungry but snacking is like an art form in Madrid. We had to look at all the different tapas, even if we couldn’t eat them all the tapas were beautiful. Tapas are little one bite versions of a bigger meal. It is great for trying out different foods. Another helpful hint is that in the basement of the market there is a bathroom, but it costs .50 euros. 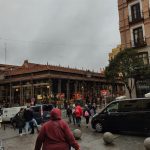 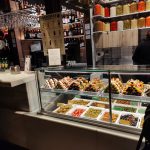 Tapas are almost an art form in Spain. 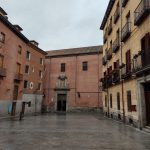 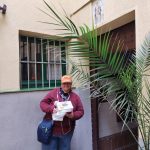 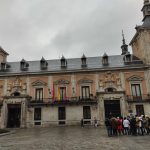 Continuing our walk we went to the Monasterio (Monastery) Del Corpus Christi. The church is very beautiful but it holds a kind of a fun treasure hunt. The nuns in the monastery are cloistered, so you are not allowed to see them and they are not allowed to come outside. However, they still need money, so what they do is bake cookies. Buying cookies from cloistered nuns that you are not allowed to see is a kind of interesting process. What you have to do is you go to the side of the church and find a very non-descriptive door. All it has on it is a little sign that says “Venta de Dolces” (selling of cookies) with some times on it. So you go to the door and you press the button. You hear a voice and you have to say “Dolces” and they buzz you in. You walk down this hallway and then you get to a revolving door with a menu of cookies. You say what kind of cookies you want and then put down your money (costs $10 euros for a box) and then the door turns and you get your cookies. You never see the nuns, but it is a very interesting experience and the cookies are very good.

From the nuns we continued to walk down the boulevard and eventually we arrived at The Almudena Cathedral. The Almudena Cathedral is an interesting place because it was planned back in 1561 when the capital was moved from Toledo to Madrid but it didn’t actually get dedicated for use until 1993. The church houses the relics of San Isidro Labrador, who was a medieval saint said to be so holy that the angels came down and worked his fields (he was a farmer) so he could spend more time preaching. 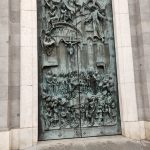 The door to the almudena cathedral is very ornate. 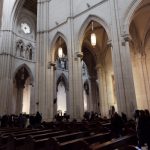 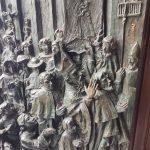 Peope like to shake the hand of the old bishop. 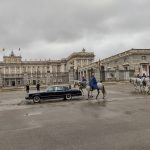 The king coming into the castle. 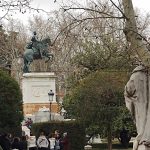 A monument to Felipe IV in the Oriente Park near the royal palace.

After going to the cathedral we wanted to go to the castle, but it was closed, sort of, there was this problem that day with going to the castle. The king was actually using it. Go figure, so we get there and we once again see the same entourage we saw back in Plaza Mayor, but now it is bigger because apparently the queen was with the group as well. It wasn’t what we expected but it was still interesting to see the pageantry associated with royalty. The crowd really seems to love their king and queen. 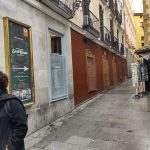 If you don’t watch out you can easily miss the alleyway to Chocolateria San Gines.

We decided to end our walk by going to Chocolatería San Ginés, which is a chocolate shop. Actually, it was founded in 1894 and is one of the oldest chocolate shops in the world. It is famous for it’s hot chocolate that is so thick that if you put your spoon on the top of your hot chocolate, it will not sink. It is also famous for churros, which if you are not familiar are long skinny sticks of fried bread. In Spain they like to dip their churros in chocolate. By the time we got to the chocolate shop AJ and Denise were done. They went to the hostal, where our room was now ready. They went to sleep for the rest of the night, I took a short nap and then went on a different experience. 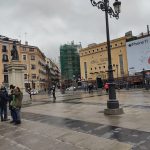 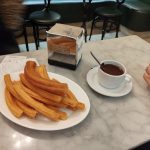 The big ones are porras and the small ones are churros. 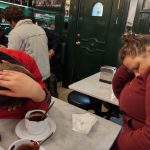 AJ and Denise were wiped out at this point in the walking tour. 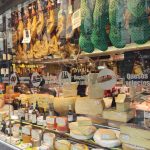 In Spain they love ham and cheese. 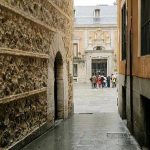 On the left is the oldest building in Spain dating to 1480, back when Madrid was under Moorish control.

A video of our walk through Spain: