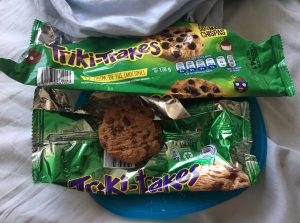 Yesterday I was at the Mexican supermarket in downtown Riverside and I was super excited because I found Triki Trakes cookies. They are one of my favorite cookies and are super common in Mexico, almost every store I know in Mexico sells them. Until yesterday I had never seen them in the United States, which is was always strange to me because I go to a lot of Hispanic markets and I see all sorts of stuff imported from Mexico and Triki Trakes are made by Marinella, which is owned by Bimbo, which is one of the largest bakeries in the world.

Anyhow, so I see them in a Mexican supermarket, and I buy them, but the thing is even though the packaging says Triki Trakes, the packaging isn’t quite the same, it is green but it is more flashy green, like a metallic green. I was also surprised that the packaging was in English, these were not imported, they were made in Pennsylvania. So it is fast Sunday, so I cannot eat them, so I to wait for until the next day (today) to break my fast.

In Mexico there are different size packages but the most common one is the long tube that is 170g. The United States package is shorter than the Mexican package, but it actually weighed more, it was 190g. The first difference I noticed was the size of the cookie. The US version is much bigger than the Mexican version. Also much denser. Two Mexican Triki Trakes will cost you 90 calories. Two American Triki Trakes will cost you 190 calories. Speaking of cost, the United Stares version costs $3 a package, a Mexican package of Triki Trakes usually cost $20 peso which is about a $1.

The final and most crucial comparison was taste. I read the ingredient list. Both versions are artificially flavored, but I was able to understand all the ingredients listed for the Mexican version, I didn’t understand, nor could I pronounce everything listed in the United States version (English is my primary language). Some other key things I noticed that were different was in the Mexican version two ingredients listed were nuts and eggs, those were not listed in the US version. Taste is of course opinionated, but I am giving this one to Mexico.

I am kind of disappointed in the US version, I really wanted them to be the same, but it wasn’t even close. They cost three times as much as the Mexican version and after analyzing the packaging I am pretty sure I just ate plastic. I hope they don’t bury me in Guanajuato because I just might have eaten enough plastic to make me a mummy.

I guess this is yet one more reason I will have to go back to Mexico. I am not saying these are the best cookies ever, they are a mass produced cookie. Like I said, you can get them almost anywhere in Mexico. I mean this is just a cookie, but I think it kind of speaks to what is happening in the United States. Why do you need to put so many chemicals in cookies?! It didn’t make them cheaper or taste any better. I don’t think the Mexican version had any “magic” recipe, I think we could have reproduced the same (or closer) thing here in the United States. It kind of boggles my mind that we didn’t.