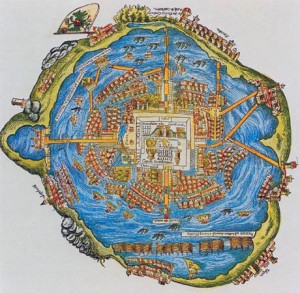 Tenochtitlan looked nothing like the modern day Mexico City.

Mexico City is built upon a really big ancient lake. I can only imagine what Mexico City looked like when Hernan Cortez first arrived. As far as 16th century standards go this was not a small place. Even back then it was a thriving metropolis. With it’s complex system of man-made islands it must of been like a crazy scene from Waterworld. Unfortunately, Cortez was really only interested in two things and neither of them involved learning about the local culture. 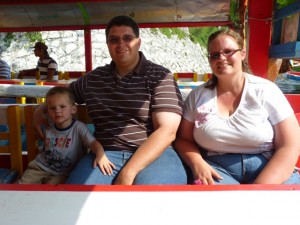 All ready to go aboard, I mean shore, I mean wherever you are!!

The years have of course passed and now Mexico City is fairly dry. The canals for the most part are all gone. The only place where you can sort of get a feel of what it was like back then is at Xochimilco. 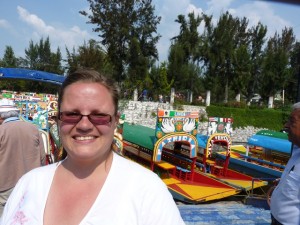 Xochimilco is now within the boundaries of the ever sprawling Mexico City, but back in the conquest days it was just a small town to the west of Mexico City. For this reason it became a very convenient base while Cortez was sacking the city. I mention this because I think it might of been some of the reason why this section remained so well preserved. Despite the ever danger of the city swallowing it up, Xochimilco still remains quite green. 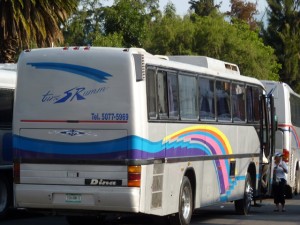 You can get to Xochimilco by public transportation, but a tour is a MUCH easier option.

You can get to Xochimilco like we did by public transportation but is far easier to take a tour or a sitio taxi out there. There are three boat launch site, the biggest and most colorful is called Nativitas. 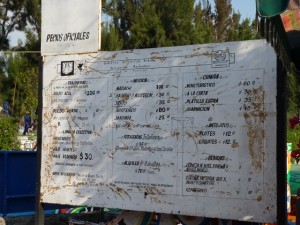 All the prices at Xochimilco are posted don't pay more or less, it causes problems if you do.

The prices at Xochimilco are posted. The cost per lancha (boat) is $200 pesos (about $19 USD) for an hour. This price includes the boat and the driver. If you are by yourself, or just really cheap, you can take any of the “collectivo” (per person) boats for less. 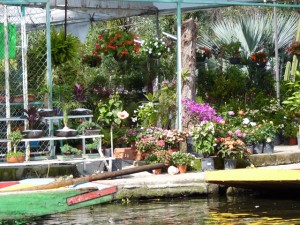 The islands upon which Xochimilco is built on make for excellent flower growing.

Along the way on your trip you will find many people trying to sell you different crafts and food. Most of the things sold are overpriced from what you will find on the land, but it is kind of novel to buy something while riding in the canals. 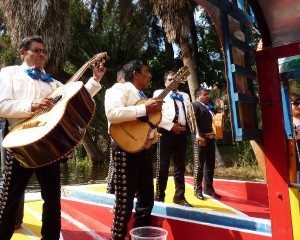 These Mariachis had a good gig with our boat. We hired them for 12 songs.My dad really hammed it up with the Mariachis, and no, he didn't drink any alcohol.

One of my favorite things to buy in Xochimilco is a song from a Mariachi. For $100 pesos ($9 USD) you can sail down the canal with your very own live Mariachi band.

When we went this last time we were with a group of my dad’s students and we all pitched in. When it was all said and done we had enough for 12 songs. Almost all the way out and back. 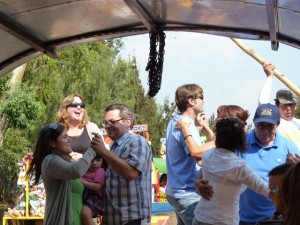 Everyone got to dance but me 🙁 (and Denise, she didn't want to).

The atmosphere of Xochimilco is that of a big party. It was a fun time everyone was dancing and taking pictures like there was no tomorrow. Even AJ found a dance partner. 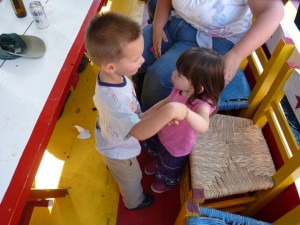