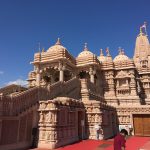 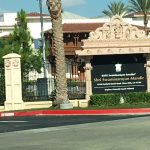 A Mandir is a holy place of worship for the Hindu religion. Kind of like a temple it is a place where Hindu worshipers come to be in contact with the divine spirit of God. While in Asia there are many such structures, there are only 5 such structures in North America.

The history of how a Mandir was constructed in Southern California goes back many years to 1977 when Pramukh Swami Maharaj, the leader of the BAPS movement of Hinduism visited Los Angeles, CA. At the time he organized a very small organization of followers that met and eventually grew into a large congregation. The dream was always to have a Mandir in Southern California. In 2000, Pramukh Swami Maharaj again visited California and decreed Chino Hills to be the site of the next Mandir in Northern America.

Chino Hills, was not ecstatic about this revelation and almost immediately put up new code laws to prohibit the Mandir from being built. The faithful were not deterred by this and in 2003 held a groundbreaking ceremony even though they didn’t have the permits to begin construction. The Hindu church, however did have an ally at the time who was the Mayor of Chino Hills, who declared the new code laws to be racist and helped the church get the law changed so they could get permits. In 2011 the church got the final approvals needed for construction and in December of 2012 the Mandir was dedicated. Even though the Mandir is dedicated the grounds are still being built up. When we were there the walkways were being built up.

The Mandir is principally made of pink sandstone and white marble.

The Mandir was built in the traditional Hindu method, which means all the materials must conform to ancient Hindu construction methods. This means that everything is hand constructed and only natural materials are used (no steel or rebar). This presents a problem considering Southern California is prone to earthquakes. To get around this they built the Mandir on top of 40 steel isolators which sits on a gigantic slab base. In this way the Mandir can resist an earthquake and be constructed in the traditional way.

The Mandir is a place of worship. Strict dress codes that include no bare shoulders, knees, or shoes are enforced in the temple. There is also no photography allowed. Inside the temple are Murtis (there are pictures of pre-dedicated Murti on their website at http://www.baps.org/Global-Network/North-America/LosAngeles/Mandir-Info.aspx), which are basically life size statues meant to represent spiritual leaders of the faith. Murti are considered physical manifestations of the spirit and are treated as if that person were present. As such not only do worshipers pray to the Murtis, but they have conversations with them, feed them, and even bathe them. 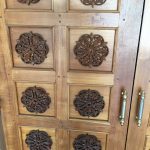 Some detail on a visitor center door.

The Mandir and visitor center are exquisitely decorated. Every inch inside the Mandir and the visitor center are intricately detailed in decorations. The images are often grand, such as multiple elephants, but sometimes they were more sublime. One series of statues I saw that was interesting to me was how a god lived day-to-day (he walked, he talked, he shaved, he took a bath, etc.) . Another series showed Krishna as a child and how he was taught by his parents. The idea I got was that these previous spiritual beings had already done everything and so they could show the followers the correct way to lead not only their spiritual life but their everyday life as well.

In the visitor center there was a bookstore, a food store, and a small cafe. On our way out we bought some Hindu snacks. It is always interesting when you eat food you can’t pronounce. Luckily for us the packaging at least told us the basic ingredients. 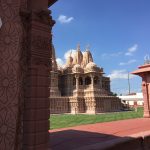 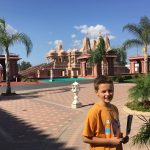 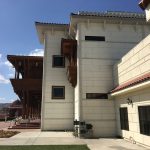 The Mandir is open every day and is free and open to the public. Donations are gratefully accepted. Even if you are not Hindu it is a must place to visit. Even if only for the beauty of the unique architecture.

A small video of the grounds: