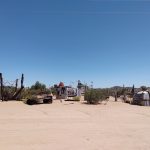 Date Visited: 6/6/20
Ever wonder what happens to those old appliances after they get thrown away? Probably not. My guess is you probably don’t. Most people if the appliance is in really bad condition either donate it or throw it away. Eventually all appliances get thrown away. That is just the way I goes. 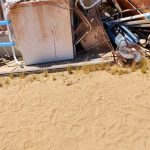 A lizard now likes in a piece called “the kitchen sink”.

Sometimes I wonder what happens to all those appliances, not relegated to the status of junk. If lucky maybe some of the metal is separated and recycled. My guess is most of it ends up in landfill and just eventually rots away. 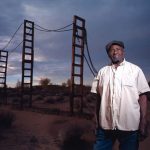 Noah Purifoy was very interested in the creative process of art.

In to this question comes Noah Purifoy. Noah was born in Alabama in 1917 during the height of the Jim Crow laws that Plessy vs. Fergusson had created. It was too much for him and in 1943, after graduating from Alabama State University, he left to Los Angeles as a social worker. Discovering what he described as an unfilled dream he began to study at what today is CalArts (the first African American student at that Institute). In the 50s when the City of Los Angeles tried to condemn the Watts Towers, Noah Purifoy was inspired by Simon Rodia, and he was one of the founders of the Watts Tower Art Center. This would be the organization that would bring the Watts Towers from condemned to state park status. 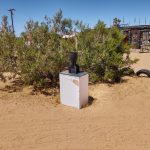 I wonder where this bomb came from.

In 1965 minor traffic stop escalated to a riot that ended with 34 people dead and over $40 million dollars worth of destroyed property, mostly burned. This event profoundly effected Purifoy and so he went out into the neighborhood, while it was still burning, and made a series of pieces called the “august event”. If your curious one of these pieces recently showed up at the Antique Roadshow. Here is a link to that episode: https://www.pbs.org/wgbh/roadshow/season/21/palm-springs-ca/appraisals/1965-noah-purifoy-watts-riots-sculpture–201605A16/.

LA Museums were afraid of showing Mr. Purifoy’s work, the thought was that his art might further the anger of the time. He needed an outlet to express himself but all he had was his social security check so he decided to go some place where he could expand for a lot less. That place would be Joshua Tree. In the middle of nowhere in the high desert Mr. Purifoy would find his blank canvas. An open space in which no one cared who he was or what he did. Piece by piece he picked up the things others didn’t want. The junk. There was a creative process and he was interested in how that creative process became art. 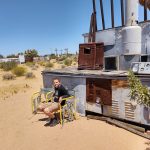 AJ said this was a space command center.

Noah Purifoy died in 2004 but the Joshua Tree location is still open to the public today. The Noah Purifoy Museum today is still a free space, completely free (sun up to sun down). There is a sign asking for donations but no one is there to stop you from not donating. Mr. Purifoy said that he wanted the museum to be a place that would “inspire you to do today, what you would have done tomorrow.” It is an interesting place for a museum. Joshua Tree is a very harsh environment, there is sun, there is wind, it dry, but when the rain comes it is hard. The art at the museum is exposed to all of this and while it was created at a point in time to be art, but you are not from that point in time, you are from this point in time. If you go to the Noah Purifoy Museum today it will not be the same museum tomorrow. It is kind of like there are two artists, Mr. Purifoy and the desert. So Mr. Purifoy is gone but his spirit is still there and so is the desert still creating art for a different time. 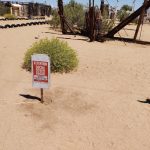 I found it kind of funny finding a social distancing sign in the middle of the desert. 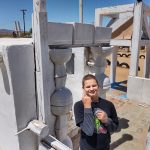 AJ after he found out he was playing on top of a house made out of toilet bowls. 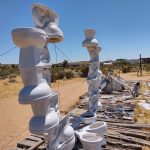 For some reason there are a lot of sculptures made out of toilet bowls. 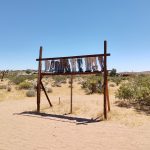 Pants, they were definitely dry. 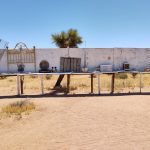 Can you find the hidden mickey? 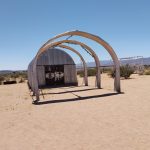 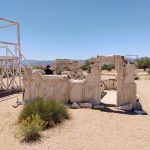 The ruins of a tomb, but the question is for who. 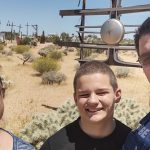 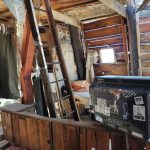 This piece is called The Shelter and is inspired by Mr. Purifoy’s work as a social worker. 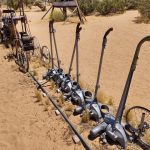 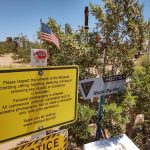 It is kind of strange to see this sign recognizing the Noah Purifoy Museum after decades of ignoring him. 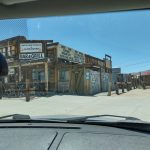