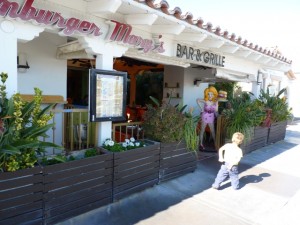 AJ was not sure what to think about Hamburger Mary

We were tipped off to Hamburger Mary’s by Groupon and thanks to Groupon we had a $30 dollar coupon that only cost $15, gotta love 50% off (although we probably spent more on that getting out to Palm Springs)!!! In a normal place January is considered a cold month, but when we got to Palm Springs it was 80 degrees outside. Not boiling, but not what we were expecting either. Denise apparently decided she was going to complement the heat by wearing a black long sleeve shirt (works great in Crestline, not so much in Palm Springs). Looking at the over exaggerated plastic pinup of Mary we weren’t exactly sure what to expect when we walked into Hamburger Mary’s. Which is good because we learned when you are in Palm Springs you have to expect the unexpected. 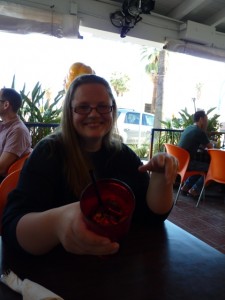 You know it is warm if Denise has ice in her soda. Gotta love Palm Springs in January. 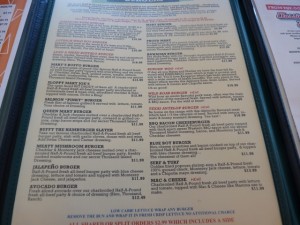 Hamburger Mary's menu is not cheap, but it is different.

While looking over the menu AJ blurted out “Doggy!” Their motto is, they welcome all your family (and if that includes your dog so be it). So if you allergic to dogs, this is not the place for you. While we were there AJ got to play with not one, but two puppies (guess what, AJ is not allergic). The restaurant is very pet friendly and dogs are treated like any other paying customer (heck even the homeless lady was given a drink when we were there). Needless to say the place has a very casual atmosphere. 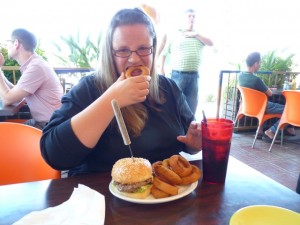 This is the I am hungry and you are crazy if I am going to pause so you can take a picture of my hamburger look. 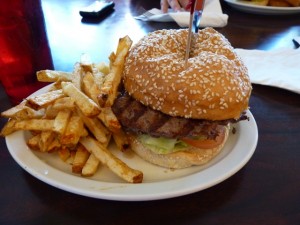 As I mentioned I did not really notice all the pets because despite the menu being mostly hamburgers (did you expect anything else), it is surprisingly very long (not to mention exotic). After doing a quick round of “eenie,miney,moe” I settled on trying the Kangaroo burger (the Kobe burger was a close second). Denise got the Antelope burger. Then finally again unexpectedly AJ wanted fruit (I guess puppies make you healthy).

I know I said you should expect the unexpected in Palm Springs, but I have to say exotic kangaroo meat was not what I expected. I was expecting something wierd and exotic, but it wasn’t. Although I think I liked it better than a regular hamburger. It was less greasy, had no tendons at all in it, and I later found out was high protein and low in fat (probably why it wasn’t greasy). If you were out for a more exotic taste a better pick would of been the antelope burger, but again there I wasn’t surprised too much. It tasted just like deer to me. I realize that is exotic to most people, but I had a friend once who used to hunt a lot, so I used to get a lot of it. All said though the food was really good and I especially enjoyed finishing Denise’s onion rings. 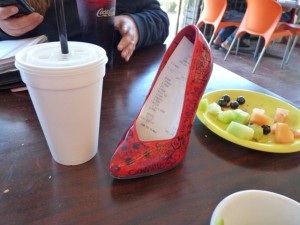 All the bills come in high heel shoes. Denise tried but it didn't fit her.

At the end of our meal I was ready to try one of their deep fried snicker bars with a side of ice cream, but Denise said she was full and wanted to go out for a date…